The Volvo C30 Electric is part of Volvo Cars' ambitious electrification strategy. It is as well-equipped, comfortable, sporty and safe as the standard car - while at the same time offering the driver a range of up to 150 kilometers per charge with almost zero carbon dioxide emissions.

Deliveries of the initial batch of 250 cars to selected customers in Europe will begin during the second half of 2011.

"We have received very positive signals from the market so far. Fleet customers such as authorities and companies will lease most of the initial 250 cars. The cars will go to Sweden, Norway, Belgium, the Netherlands, France, Germany, USA and China. If demand continues to remain high, we will increase our production," says Lennart Stegland, director of Volvo Cars' Special Vehicles.

If the Volvo C30 Electric is recharged with renewable energy, for instance from windpower or hydropower, the car has almost no climate impact and produces no local emissions. This in combination with the superior energy-efficiency of an electric motor compared with a combustion engine suggests that electric cars are all set to become increasingly common in the future.

"It is estimated that by 2020 between five and ten percent of cars in Sweden will be powered by electricity. Around 2020-2025 we expect that electric cars will have conquered three to ten percent of the EU market share. Different markets have different potentials," says Lennart Stegland.

Electric vehicles use relatively little electricity, and the increasing demand will be more than covered by the ambitious expansion plans for renewable energy sources all over Europe. One single windpower turbine, for instance, produces sufficient renewable energy to power 3,000 electric cars.

Up to 150 kilometres on one charge

In order to give the car a range of up to 150 km, the Volvo C30 Electric has a 24 kWh battery pack, of which 22.7 kWh is used to power the car. The batteries (2x140 kg) are fitted both where the fuel tank is normally located and centrally in the vehicle. This means that the luggage space remains intact.

Under the bonnet the conventional combustion engine has been replaced by a far more compact 111 hp electric motor that offers 220 Nm of torque. In addition, the car has a 400 Volt high-voltage system.

The lithium-ion batteries are recharged via a regular 230 Volts power socket. The cable is plugged into the car's grille via a specially designed charge connector.

The time needed for recharging varies with the current available. A full 10-Ampere charge takes approximately 10 hours. This time drops to around 6-8 hours with 16A.

The Volvo C30 Electric also has a DC/DC to support other systems, including the 12 Volt system that supplies various traditional components with power.

The electric motor's instant torque delivery gives the Volvo C30 Electric acceleration from 0 to 70 km/h of just 6.0 seconds. The car has a top speed of 130 kilometres an hour.

The certified range according to the NEDC (New European Driving Cycle) is 163 km. However, Volvo Cars specifies up to 150 kilometres as the car's practical range.

"150 kilometres is a considerably longer distance than 90 percent of all commuters in the world cover per day. The average figure is 45 km/day. This means that the C30 Electric could be used for daily commuting," explains Lennart Stegland.

The Volvo C30 Electric is equipped with three climate systems:

One supplies the passengers with heating or cooling, while the other cools or warms the battery pack as necessary. The electric motor and power electronics are water-cooled.

The C30 Electric has an innovative solution that makes it possible to get comfortable heating in cold winter conditions without compromising the battery driving range.

"The driver can program and control the climate unit to suit the trip. Ethanol is the default mode that is used when the battery capacity is needed for driving as far as possible. However, on shorter distances electricity can be used to power the climate system," explains Lennart Stegland.

In order to get a comfortable start of the journey, the driver can program the system to cool or heat the car in advance. Pre-programming is done in the menu for the car's settings or remotely via mobile phone.

The C30 Electric has solar film at the top of the windscreen and tinted rear windows to reduce incoming solar radiation.

Unique design - and the first car with aluminium brakes

The Volvo C30 Electric will initially be available in Cosmic White with an R-Design body kit in Orinoco Blue. The blue colour is repeated on the door mirrors, around the fog lamps and on the wheel rims. Inside the car, the blue shade is echoed on the gear selector, on the centre stack and in the stitching of the light-coloured, leather/textile seat upholstery.

The design also includes the special C30 Electric striping pack, emblems on the charge connector cover and the car sides, as well as engraving on the tail panel.

In terms of technical specifications, the C30 Electric is the first Volvo to be fitted with rear brake discs made of aluminium. This reduces the weight and will also provide long term reliability since  the brakes are used less often due to the efficient motor regeneration.

Due to factor such as increased weight and different weight distribution, Volvo Cars' stability system DSTC has been modified in the C30 Electric.  This ensures that the battery-powered version has the same high driving pleasure and safety level as the standard C30.

The instruments have been specially designed for electric power. Instead of the traditional rev counter there is a gauge showing the battery pack's charge level as well as the car's current energy usage. At the top between the round gauges there is a display where the driver can scroll between average consumption in kWh/100 km, current consumption in kWh/100 km, remaining range at current driving style and average speed.

The display is also the place for programming of the preheating timer, choice of power source for the climate system (electricity, ethanol or both) and the choice of Ampere level for battery charging.

The instruments in the Volvo C30 Electric also include:

The gear selector lever and the parking brake are electrically operated. In addition to Neutral (N), Park (P) and Reverse (R) there are two gear settings for driving forward. In Drive (D) mode the energy produced during engine braking is used to regenerate the battery, while the Highway (H) setting has a free-roll Coasting function that disables energy recuperation when the driver lifts his or her foot off the accelerator. This is for instance suitable during highway driving. The selected gear mode is shown in the instrument cluster.

Energy-efficient down to the smallest little detail

Energy-efficiency has been given top priority in the design of a number of key features in the Volvo C30 Electric:

Underneath, the car is fitted with panels that protect the batteries as well as they help improving the airflow, thereby reducing aerodynamic drag. The rear spoiler and diffuser are the same as the ones fitted to the Volvo C30 DRIVe. The four 16-inch wheels total weight is 11 kilograms less than the wheels fitted to the DRIVe model. The front day-running lights are of the energy-efficient LED type.

"The day-running lights are a perfect example of the philosophy that no detail is too small for being included in the quest for energy-efficiency. The energy we save with these LED lights gives the driver a tiny bit extra driving range on each charge," says Lennart Stegland.

Descriptions and facts in this press material relate to Volvo Cars' international car range. Described features might be optional. Vehicle specifications may vary from one country to another and may be altered without prior notification.
Related Images
Apr 01, 2011 ID: 37358 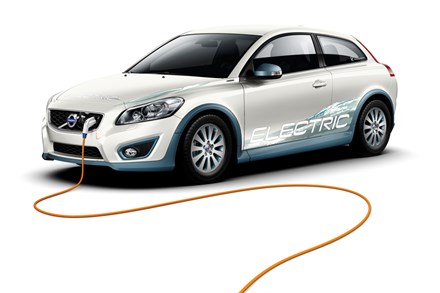