NOTE: In The Spirit Of: T'was The Night Before Christmas

T'is the dawn of the holidays and all around town,

Shoppers are bustling - for "treasures" abound.

This hasn't been your typical year,

And celebrating the season is a reason for cheer!

To package the ultimate gift for an entire family of four.

In catalogues since October, now to FAO Schwartz retailers what should appear,

The sweepstake is open to all shoppers who enter

When the drawing is done late December, who knows the winner.

For sure, some lucky person will be selected,

Then it's 7 days/7 nights to Sweden to see first-hand how their holiday gifts are made - then most importantly, collected.

Once arriving back home, there'll be a delivery to their door:

The premier family wagon,...filled with the finest crafted toys,...from the world's ultimate toy store - as a holiday celebration,...who could ask for anything more.

BRIO® was founded in 1884 by Ivar Bengtsson in Osby, in the south of Sweden. He left the company to his three sons and the name BRIO was introduced. BRIO is short for the brothers Ivarsson of Osby. The brothers started to produce wooden toys, which turned out to be a success. Today BRIO still has its head office in Osby, Sweden, but there are BRIO-companies in ten countries and BRIO toys are sold in another thirty countries all over the world. BRIO® branded products are targeted mainly at infants and young children and include Wooden Railway, BRIO Friends, Builder, Ambi, Infant Developmental and BRIO Outdoor. www.briotoy.com

Founded in 1862, FAO Schwarz has long been recognized as the world's ultimate toy store. The company has consistently delivered exclusive, unusual and trend-setting merchandise. Its stores, catalogues and online store (www.fao.com) have been designed to interact with customers in a manner that distinguishes it from other retailers and involves customers with merchandise. The company currently operates 40 locations nationwide, including flagship stores in Chicago, Las Vegas, Boston, New York, Orlando and San Francisco. FAO also produces The Ultimate Toy Catalogue, a direct mail catalogue that is distributed to more than six million consumers annually. For more information about FAO Schwarz, visit the company's Web site at www.fao.com.

Volvo Cars of North America, LLC (VCNA), is an affiliate of Ford Motor Company's Premier Automotive Group based in Irvine, CA. And, is a subsidiary of the Volvo Car Corporation of Goteborg, Sweden, which will be celebrating its 75th anniversary in 2002. VCNA provides marketing, sales, parts, service, technology and training support to Volvo automobile retailers in the U.S., Canada, Mexico and Puerto Rico. The 2002 Volvo automobile line includes the new sporty S60 and S60 AWD, the flagship S80 luxury sedan, versatile V70 wagon and rugged Cross Country, C70 Coupe and convertible, and the compact S40 and V40 models. www.volvocars.com

Keywords:
Events/Activities, Special Interests
Descriptions and facts in this press material relate to Volvo Cars' international car range. Described features might be optional. Vehicle specifications may vary from one country to another and may be altered without prior notification.
Related Images
Sep 18, 2003 ID: 537 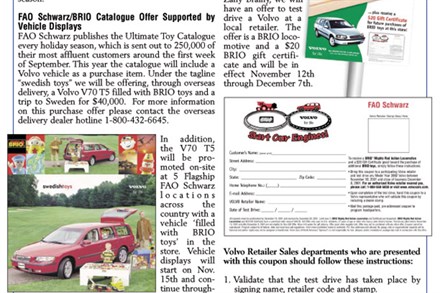