ROCKLEIGH, N.J. (July 19, 2011) - A newly published analysis from the Highway Loss Data Institute (HLDI) and the Insurance Institute for Highway Safety (IIHS) indicates that Volvo XC60s get into fewer low-speed crashes than comparable vehicles thanks to Volvo's City Safety technology, a standard feature on all XC60s.

HLDI examined claim frequency under property damage liability, bodily injury liability and collisions. Their data concluded frequency rates for the XC60 were lower than all other midsize luxury SUVs, specifically:

"This is our first real-world look at an advanced crash avoidance technology, and the findings are encouraging," said Adrian Lund, president of HLDI and IIHS. "City Safety is helping XC60 drivers avoid the kinds of front-to-rear low speed crashes that frequently happen on congested roads."

IIHS last year estimated that current crash avoidance features have the potential to prevent or mitigate as many as 1.9 million crashes each year, and current users have stated the systems help them to be safer drivers.

"It is great to see validation from HLDI and IIHS of the safety systems that we at Volvo are continually developing," said Thomas Broberg, Volvo Car Corp.'s senior safety expert.  "This is another step towards achieving our Vision 2020 of eliminating serious injuries and fatalities by the year 2020, and an even larger step towards a crash-free future."

HLDI also looked at how the crash reductions for the XC60 affected overall insurance costs:

HLDI analysts compared insurance claims data for the 2010 model XC60 with two control groups: other 2009-10 midsize luxury SUVs and other 2009-10 Volvo models.  The analysis controlled for a variety of geographic and demographic factors that can affect claims.  Geographic factors include garaging state and vehicle density (the number of registered vehicles per square mile).  Demographic factors take into account such things as the primary driver's age, gender and marital status.  Other factors include calendar year plus the policy deductible.

City Safety keeps a watch on vehicles in front with the help of a laser sensor built into the windscreen at the height of the rearview mirror.  Between 2-19 mph, the car automatically brakes if the driver does not respond in time when the car in front slows down or stops - or if the driver is driving too fast towards a stationary object.  If the relative speed difference between the two vehicles is less than 9 mph, the collision can be entirely avoided.  If the speed difference is between 9-19 mph, the speed at impact is reduced by about one half, thereby mitigating the collision. City Safety also is also standard on the 2011 and 2012 S60, 2012 S80 and 2012 XC70.

In addition to City Safety, the XC60 is available with Pedestrian Detection with Full Auto Brake as part of its optional Technology Package.  Pedestrian Detection with Full Auto Brake uses forward-looking radar and digital camera identification that scans an object and matches its shape against an image database of about 10,000 forms. The system can track up to 64 pedestrians and their paths - all within 50 milliseconds.

If a pedestrian walks into the car's path and an impact is imminent, a warning light and tone warn the driver.  If the driver does not react, the car will apply up to 100 percent available braking force, thereby avoiding a collision if the car is traveling 19 mph or less.  At 20 mph and higher, the available breaking force will significantly mitigate the collision.

In the effort to continually be the industry leader in safety, Volvo is working on plans for the next generation of active safety detection which features animal detection.  The system, much like today's pedestrian detection, will feature a radar sensor and infrared camera - and it will function in the dark when the likelihood of hitting an animal increases.  The system must be complex in order to recognize a variety of animals in differing sizes - from dogs to moose. According to IIHS, from 1993-2007, 2,499 people died in collisions involving wild animals and the number of collisions continues to increase.

Keywords:
Volvo XC60, Safety, Technology, 2010, 2011, 2012
Descriptions and facts in this press material relate to Volvo Cars' international car range. Described features might be optional. Vehicle specifications may vary from one country to another and may be altered without prior notification.
Related Images
Mar 04, 2008 ID: 14616 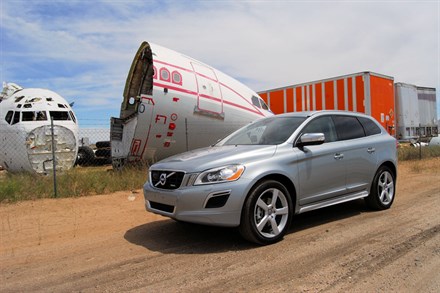