When the XC90 was introduced four years ago, it changed the perception of what a luxury SUV could be. So what does Volvo do for an encore? It raises the bar for 2007 by giving the XC90 more style, refinement and performance. “We have listened closely to our customers and enhanced the XC90 to boost our competitiveness,” says Frederik Arp, president and chief executive officer of Volvo Cars. “We already have a winning design, but have introduced more sophisticated lines and materials and a better driving experience – but without compromising safety.”

Topping the list of changes is an all-new 3.2-liter in-line six-cylinder engine. Replacing the 2.5T, this naturally aspirated powerplant utilizes the latest technology to maintain the same exterior dimension and fuel consumption as a five-cylinder engine. The result is 235 horsepower, an increase of 27 hp, and an identical 236 lb.-ft. of torque. It achieves performance and economy thanks to Variable Cam Timing (VCT) and Cam Profile Switching (CPS). With CPS, the intake valves can be lifted to different heights depending on engine revs and load – a lower lift for economical driving and a higher one for more power.

A six-speed automatic transmission with “Geartronic” is now standard on the XC90 3.2 as well as the range-topping XC90 V8. Meanwhile the latter continues to be powered by a high-tech engine that was introduced in mid-2005. The 4.4-liter 32-valve V8 is fitted with continuously variable intake and exhaust valve timing (CVVT). The naturally aspirated V8 develops 311 horsepower and 325 lb.-ft. of torque. The new 6-cylinder and the V8 both meet the stringent ULEV II emissions standards.

The XC90’s styling is enhanced with a new grille, bumpers and taillights. The 3.2 receives color-coordinated side moldings and door handles while the V8 gains aluminum roof rails and color-coordinated wheel arch moldings. Both models sport new outside mirrors with integrated turn signals that flash three times with light pressure on the turn signal stalk.

An upgraded interior features a standard leather gearshift knob and increased brightwork for the 3.2. Changes for the V8 include new watch-dial instruments and optional Sovereign Hide Chestnut Brown leather upholstery. Selecting the Touring Package for the V8 adds new Sapeli wood inlays including the gearshift knob and steering wheel, plus 18-inch “Camulus” alloy wheels. An auxiliary input, MP3 capability and satellite radio preparation is standard on both models.

The list of stand-alone options is augmented by new “Active” Bi-Xenon headlights with beams that swivel up to 15 degrees for enhanced nighttime visibility. A high-power Dynaudio sound system is offered on the V8. Available on both models is Volvo’s state-of-the-art digital video Blind Spot Information System (BLIS).

Standard on the V8 and optional on the 3.2 is All-Wheel Drive with Instant Traction™. This employs computer-controlled Haldex AWD that instantaneously delivers up to 50 percent more torque to the rear axle only when needed, such as during takeoff.

Adhering to Volvo’s core value of safety, all XC90 models are equipped with Roll Stability Control (RSC), Dynamic Stability and Traction Control (DSTC), Side impact Protection System (SIPS) with side airbags and Inflatable Curtains for all three rows.

Keywords:
XC90 (2002-2014), Safety, 2007
Descriptions and facts in this press material relate to Volvo Cars' international car range. Described features might be optional. Vehicle specifications may vary from one country to another and may be altered without prior notification.
Related Releases 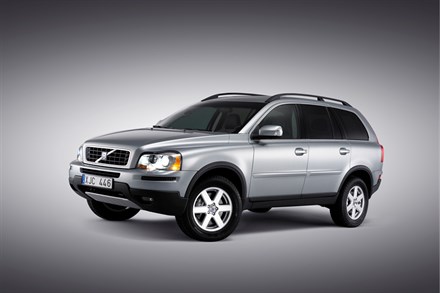