NEW YORK CITY (April 12, 2006) – Dr. Ingida Asfaw, an Ethiopian-born Detroit heart surgeon who kept a half-century promise to himself by creating an international coalition to address his homeland’s medical crises, has been named “America’s Greatest Hometown Hero” at the 4th Annual Volvo for life Awards ceremony. For his efforts, he receives a $50,000 contribution to the charity of his choice and a new Volvo every three years for life.

Dr. Asfaw, 68, founded the Ethiopian North American Health Professionals Association (ENAHPA) in 1999 with the goal of providing healthcare to the people of Ethiopia, a country where the ratio of physicians to population is 1 per 100,000. Today, ENAHPA is a network of more than 500 medical and non-medical professionals and volunteers from the United States, Canada, China and South America who donate their time and talents to address the Ethiopian healthcare crises through medical mission trips and other social initiatives.

Held at the Rainbow Room on April 12, the Volvo for life Awards ceremony capped off the largest-ever national search for and celebration of everyday heroes, providing $1 million in awards and financial contributions.

The 4thj annual initiative, launched in July 2005, called on people nationwide to visit www.volvoforlifeawards.com and nominate an unsung hero they know in one of three categories: safety, quality of life and environment. Volvo received 4,341 nominations representing all 50 states. In February 2006, Volvo selected 100 semi-finalists and narrowed the field to the top three finalists in the three categories.

In 1958, 16-year-old Ingida Asfaw left his native Ethiopia to study medicine in the United States. At the time, knowing his homeland possessed no formal medical schools and no semblance of a national healthcare program, he promised himself he would become a doctor and return to Ethiopia with healing hands. Now, a half-century later, Dr. Asfaw has kept true to his promise, becoming a world-renowned cardiothoracic and vascular surgeon based in Detroit and creating the Ethiopian North American Health Professionals Association (ENAHPA), an international network of more than 500 medical and non-medical professionals who donate their time and talents in Ethiopia, a country where the ratio of physicians to population is 1 per 100,000.

Since 2001, Dr. Asfaw has led ENAHPA on annual medical missions in efforts to address his homeland’s “profound healthcare crisis.” To date they have distributed anti-retroviral drugs for people living with HIV/AIDS, performed Ethiopia’s first open-heart surgery and created a child-sponsorship program to support children orphaned by HIV/AIDS. In addition, Dr. Asfaw and ENAHPA have delivered more than 10,000 textbooks and journals to professionals and students throughout Ethiopia in the fields of medicine, law, engineering, nursing, pharmacology and social work.

“We are humbled and honored to have learned about these more than 4,000 incredible heroes who embody the values of conscience, care and character this program was intended to celebrate,” said Anne Bélec, president and chief executive officer for Volvo Cars of North America. “Dr. Asfaw’s determination and willingness to dedicate his talents to help others makes him a true hero, setting an example we can all hope to strive for. We wish to congratulate all of our nominees and truly appreciate the task our judges’ faced in selecting a winner from a phenomenal pool of heroes.”

About the Volvo for life Awards Ceremony

Hosted by Benjamin Bratt, the Volvo for Life Awards ceremony was attended by more than 400 media, entertainment and other executives at the Rainbow Room in New York and featured music performances by Avril Lavigne, Johanna Gard and the Harlem Gospel Choir. Six of the Volvo for life Awards judges—Aaron, Kennedy-Shriver, Ride, Lin, Bradley and Bevilhymer—recognized Dr. Asfaw and the other category winners for safety and environment, who also each received a $50,000 charitable contribution:

Preventing violent thoughts as a crime deterrent? Dr. Slutkin thinks it’s possible, and based on community involvement techniques he refined while combating the HIV/AIDS crisis in Uganda, he’s created a system that just may prove it is. He founded “CeaseFire,” an organization and philosophy that can predict where in neighborhoods gang-related violence will most likely occur, and who is most at-risk. He then dispatches a team of highly skilled, and paid, counselors (including many former gang members) to prevent violence often moments before it occurs. Their mission: identify people having violent thoughts, then counsel them out of their anger. And, when a shooting occurs, he has a team of local church members, prominent neighborhood individuals, neighborhood associations and others to work directly with all individuals in that neighborhood to respond to the violence. This door-to-door, street-by-street violence prevention program has helped create a 50 to 75 percent drop in shootings in some neighborhoods over five years, and it’s soon to be rolled out in other cities nationwide.

In the early 1990’s Williams felt a calling. Concerned by antiquated environmental regulations, the former science teacher dedicated herself to mobilizing marginalized communities against unnecessary industrial pollution. Based on the philosophies of her mother, prominent environmentalist Norma “Stormy” Gail Williams, she formed the California Communities Against Toxins (CCAT), a collective of more than 70 localized groups working to curb pollution in their regions. By building the CCAT network on non-traditional alliances, Williams has been able to unite communities through a collaborative and cooperative social infrastructure, avoiding the competition and in-fighting that dooms many environmental collectives. As a result, today CCAT is the oldest community-based environmental network in existence, having aligned groups as diverse as Native American tribes, environmentalists, business owners, school boards and elected officials against pollution in their communities for more than 17 years. Led by Williams, members of CCAT have successfully stopped incinerators, landfills, industrial facilities and nuclear waste dumps from being built in communities where the health of children and community members would have been compromised.

In addition to the three category winners, Volvo also named 12-year-old Grace Farnan of South Hamilton, Mass., the winner of the Second Annual Alexandra Scott Butterfly Award. The award celebrates Alexandra Scott, a Volvo for life Awards winner from Wynnewood, Pa., who passed away at age eight from cancer. She raised more than $1 million for pediatric cancer research through lemonade sales and other fundraising activities. Parents Jay and Elizabeth Scott continue promoting Alex’s cause and raising money for pediatric cancer research through their foundation, Alex’s Lemonade Stand.

When Grace's maternal grandmother peacefully passed away while in hospice care two years ago, she wanted to give something back to the people who helped care for her grandmother. Grace became the youngest volunteer for HNS, which provides compassionate support to individuals and families facing life-threatening illnesses. She has collected more than 225 new picture frames for HNS clients to keep photos of loved ones close at hand. Enlisting her own Girl Scout troop to help make guest books for patients, Grace has helped provide the means for families, visitors and staff to write encouraging notes and messages that a HNS client can keep at his or her bedside. Families of dementia patients particularly appreciate the guest books, as it enables them know who has visited their loved one. Grace’s efforts have helped provide more than 500 guest books for HNS.

Grace was recognized by the Scotts at the Volvo for life Awards Ceremony and will receive a $25,000 contribution to the charity of her choice. Volvo will also donate $25,000 to the Alex’s Lemonade Stand Foundation.

Keywords:
Events/Activities, Special Interests
Descriptions and facts in this press material relate to Volvo Cars' international car range. Described features might be optional. Vehicle specifications may vary from one country to another and may be altered without prior notification.
Related Images
Apr 13, 2006 ID: 3736 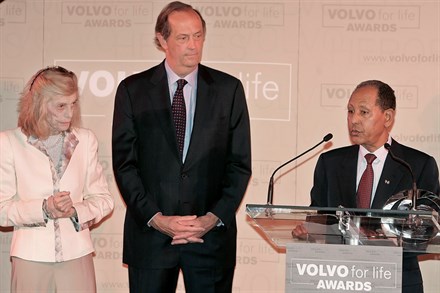 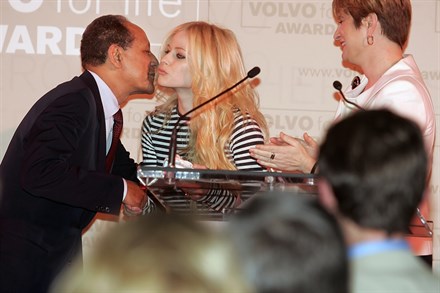