Volvo Safety, with Children in Mind

New York (April 12, 2006) - For over 30 years, Volvo has developed child safety systems to help protect its littlest passengers. Throughout those years, Volvo held to the belief that safety protection should be for all occupants, regardless of size or age. While safety is paramount, Volvo also believes that keeping children comfortable is in the best interest of parents, as well as the children themselves.

The Beginning of Modern Child Safety

The impetus for modern child safety was born in Sweden 1963. The first rear-facing child safety seat was designed by Bertil Aldman of Chalmers University in Gothenburg, Sweden. While watching an American TV program, Aldman noticed the position of the astronauts in the Gemini space capsule. By lying on their backs, in opposite direction to the force of acceleration, they were better able to withstand the acceleration. Professor Aldman believed that this principle could be applied to protect a child in the event of a head-on collision.

Volvo mirrors Professor Aldman's belief, further adding that children are best protected during the first three years of life by facing rearward in the car seat.

Auxiliary Seat for Volvo wagons were launched in 1972. In 1978 Volvo introduced a Booster Cushion. The Integrated Child Booster Seat in the middle of the rear seat was first offered in 1991. Each of these features continues as part of Volvo's child safety program. Always striving to improve child safety, Volvo introduced unique safety systems into the design of its XC90 to further protect young passengers in the rear most seats.

Since its inception in 1970, Volvo has gathered over 35,000 real world accident reports, nearly 5,000 of which involving children up to the age of 10 years old. Volvo's own research shows that a 90% reduction in injury is reported with children who are rearward facing.

In the early 1990s, Volvo presented a request to the International Standardization Organization (ISO) to create a unique mounting system for the proper placement and attachment of infant seats. Volvo chaired, and still chairs, the ISO working group that ultimately led to global standardization for seat attachments called ISOFIX or Latch System.

Volvo introduced its first rear-facing infant/child seat in 1972. That same year saw the introduction of the wagon Auxiliary Seat. Volvo does not offer infant/child seats in North America; however wagon Auxiliary seats are still available through Volvo retailers or factory installation. In North America, child seats must be transferable to any vehicle type. Due to the complex nature of ensuring that one child seat fits all, Volvo elected not to offer Child Seats in this market.

Booster Cushions help to eliminate the geometric problem of the hip belt not properly aligning for children. Therefore there is a risk that in serious accidents, without an elevated seating position, the hip portion of the three-point belt will slide up and over the iliac crest (which is not very big in children), causing injury to the stomach area. Issues also arise in the case of seatbelt wearers short of a full-sized adult. The diagonal belt strap tends to be very close to the throat and can cause some discomfort. The booster cushion solves both problems. An added advantage of the elevated position is that the child is able to see out of the window in all wagons and most sedans - a nice feature for child and parents alike.

The Integrated Booster Seat is built into the armrest in the middle of the rear seat. With a few easy hand operations, the armrest can be turned into a seat with safety and comfort in mind. The seat is designed for children weighing between 33 and 80 pounds, with a height between 38 and 54 inches. This seating position also allows proper positioning of the three-point seat belt.

Booster Cushions have been found to provide significant protection, reducing injuries by as much as 60 percent.

Wagons can pose unique safety challenges. Often, and unfortunately, small children sit in the cargo area, albeit a quick trip to school, store, airport, etc. While wagons are built differently than sedans regarding energy absorbing zones, they both are designed to help protect rear seated passengers. Most rear impacts are at low speed: however; at even 7 mph an unbelted child, in a wagon, can be thrown out the rear window. Volvo wagons have a uniquely reinforced rear structure that helps to move impacting forces forward of the cargo area, unlike sedans that concentrate impacting forces into the trunk area. With proper use of the Auxiliary Seat there is a reduction of injury or even death. The Volvo Auxiliary Seat is fitted with three-point seat belts and is designed for children between 50-88 pounds and 59 inches tall.

About 45 percent of all accidents are frontal collisions. Rear impacts account for roughly 21 percent of all accidents and tend to be at lower speeds than frontal impacts. Children properly restrained in an Auxiliary Seat are well protected for frontal impacts as acceleration forces are spread over a greater area than those facing forward. With proper use of the Volvo Auxiliary Seat, rear-facing occupants are better protected than those left unrestrained.

Distilling over 30 years of child safety development into one vehicle has again helped Volvo move industry Safety forward. One Volvo objective in the development of the company's first SUV was to provide side impact protection for all passengers. The XC90 third row occupants benefited from having the world's first Inflatable Curtain (IC) for all three rows of seats and a body shell that absorbs and channels impacting forces away from passengers. In addition, the rear axle assembly has energy absorbing properties that also help, during side impacts, to channel forces away from occupants The IC deploys downward during side impacts and roll-over situations to help protect side seated occupants. With Volvo's judicious use of Ultra-High Strength steel forming the rear body structure, impacting forces are moved away from occupants, to be absorbed by sheet metal rather into the vehicle driver or passengers.

Passengers are protected during rear impacts with two major design principles: Again, Volvo's use of Ultra-High Strength steel combined and with about 13 inches of space between rear seat and rear glass/tailgate structure. The Ultra-High Strength steel surrounds the rear tailgate area while the distance between rear seat and tailgate provides energy absorbing zone. During laboratory crash testing at 35 mph this design has shown to be an effective energy mitigation structure for the third row of seats and further protects the occupants usually sitting there, namely children.

Keywords:
Safety, Technology, Special Interests
Descriptions and facts in this press material relate to Volvo Cars' international car range. Described features might be optional. Vehicle specifications may vary from one country to another and may be altered without prior notification.
Related Images
Apr 12, 2006 ID: 3702 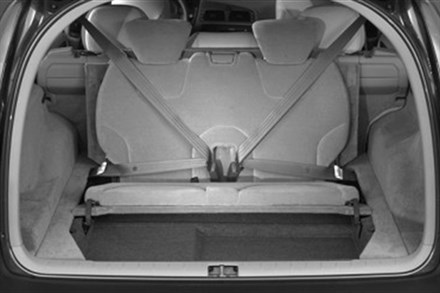 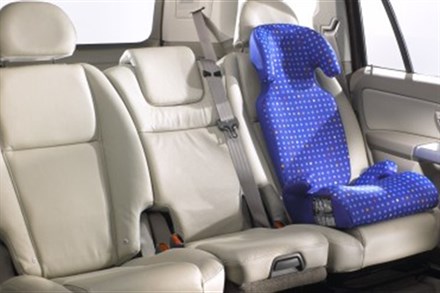