"We're amazed by the overwhelming level of interest in the contest and applaud the efforts of all of the students who participated," said Greg Hembrough, VCNA sales and marketing manager in the Western Region.  "It made selecting a winner very difficult.  Ultimately, we're very pleased so many kids received valuable information on how to make a difference in protecting the environment and hope they had fun in the process."

Best known for his gigantic "whale" murals in 80 cities in 17 countries, marine life artist Wyland has done more than any other artist to raise awareness of the beauty of life on our blue planet.  His Wyland Foundation, in partnership with the Scripps Institution of Oceanography and the Ocean Institute of Dana Point, Calif., is actively engaged in teaching millions of students around engaged in teaching millions of students around our oceans, rivers, lakes, streams, and wetlands.  His latest project, FOCUS (Forests, Oceans, Climate - and US) brings together the U.S. Forest Service, NOAA, the Wyland Foundation, numerous non-profits to teach young people about our forests and ocean - and how these two irreplaceable resources hold the key to the future of our water supplies, climate, and global health. For more information, visit http://www.wylandfoundation.org/.

Disneynature's film "Oceans" (www.disney.com/oceans) offers an unprecedented look beneath the sea in a powerful motion picture that is in theaters now.

Keywords:
Environment, Events/Activities, Mission, Sponsoring
Descriptions and facts in this press material relate to Volvo Cars' international car range. Described features might be optional. Vehicle specifications may vary from one country to another and may be altered without prior notification.
Related Images
Apr 29, 2010 ID: 32493 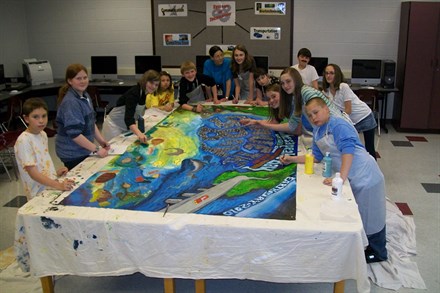