IRVINE, Calif. (March 31, 2010) - Volvo Cars of North America, LLC, (VCNA) will be a title sponsor of a nationwide mural contest inspired by Disneynature's OCEANS and the coinciding eight-city "One Ocean, One Planet" mobile education tour along the West Coast.  Kicking off on Apr. 5, the contest allows more than 15,000 students in 30 states the chance to win tickets to watch "OCEANS" at a local theater, as well as limited edition autographed artwork from Wyland and art supplies for the classroom. The winning classroom will be notified on Apr. 28.

The "One Ocean, One Planet" mobile education tour will feature the Wyland Foundation Clean Water Mobile Learning Center, a 1000-square-foot biodiesel-powered mobile theater / science center.  It will be accompanied by the "One Ocean, One Planet" Volvo XC60 Art Car, which is wrapped in an image designed by renowned muralist and children's environmental advocate Wyland for a 2010 United Nations stamp issue about ocean conservation and will deliver art supplies to elementary and middle schools.  The tour will travel to eight schools along the West Coast April 5-22, 2010 to celebrate Environmental Education Week and will combine the knowledge of artists, conservationists and scientists to teach students about marine life conservation, the importance of protecting watersheds, and the role of the arts in raising awareness about our oceans and environment.

"We had a really positive experience working with Wyland at a fundraiser last September so we were excited at the opportunity to partner with him and the Wyland Foundation again," said Greg Hembrough, VCNA sales and marketing manager in the Western Region.  "We're thrilled to be on the selection committee to choose the winning mural, and to participate in 'One Ocean, One Planet' tour stops.  We expect the students will show real enthusiasm to learn more about why it's important to protect our oceans and marine life."

Dating from the early 1970s, Volvo Cars' commitment to the environment covers the entire lifecycle of the car, from design, engineering and production to useful life, service and recycling.  Some notable milestones include:

Best known for his gigantic "whale" murals in 80 cities in 17 countries, marine life artist Wyland has done more than any other artist to raise awareness of the beauty of life on our blue planet.  His Wyland Foundation, in partnership with the Scripps Institution of Oceanography and the Ocean Institute of Dana Point, Calif., is actively engaged in teaching millions of students around engaged in teaching millions of students around our oceans, rivers, lakes, streams, and wetlands.  His latest project, FOCUS (Forests, Oceans, Climate - and US) brings together the U.S. Forest Service, NOAA, the Wyland Foundation, numerous non-profits to teach young people about our forests and ocean - and how these two irreplaceable resources hold the key to the future of our water supplies, climate, and global health. For more information, visit http://www.wylandfoundation.org/.

Disneynature, the studio that presented the record-breaking film "EARTH," brings OCEANS to the big screen on Earth Day, 2010.  Nearly three-quarters of the Earth's surface is covered by water and OCEANS boldly chronicles the mysteries that lie beneath.  Directors Jacques Perrin and Jacques Cluzaud dive deep into the very waters that sustain all of mankind-exploring the playful splendor and the harsh reality of the weird and wonderful creatures that live within. Featuring spectacular never-before-seen imagery captured by the latest underwater technologies, OCEANS offers an unprecedented look beneath the sea in a powerful yet enchanting motion picture that unfolds on April 22, 2010.  "See OCEANS, Save Oceans" is an initiative in which Disneynature will make a contribution to The Nature Conservancy to save coral reefs in honor of every guest who sees OCEANS during opening week (April 22-28, 2010).  For more information, visit disney.com/oceans or become a fan on Facebook: facebook.com/Disneynature.

Keywords:
Volvo XC60, Environment, Events/Activities, Mission, Sponsoring, 2010
Descriptions and facts in this press material relate to Volvo Cars' international car range. Described features might be optional. Vehicle specifications may vary from one country to another and may be altered without prior notification.
Related Images
Mar 31, 2010 ID: 32246 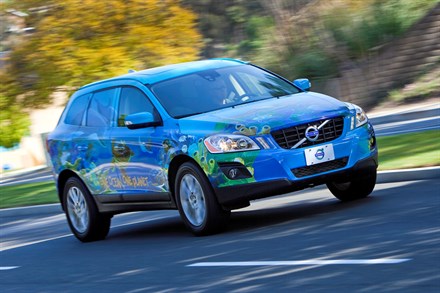 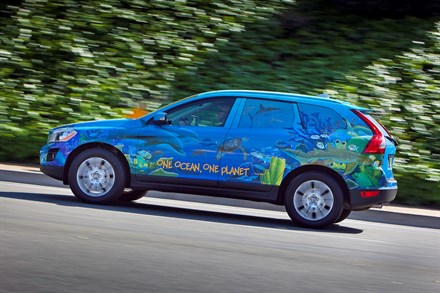