The STCC finale became just as dramatic as it possibly could get. A hard pressed Volvo team came to Mantorp Park fifteen points behind in the team championship and with Tommy Rustad nine points behind in the drivers' championship. In front of a crowd of 25,000 and over 800 own guests, the Volvo team Polestar managed to turn the tide to victory after top class performance and a lot of drama.

Robert Dahlgren was in top in qualifying again and took a fifth place finish in the first heat after starting eleventh on the grid due to a 10 spot drop as penalty from the previous race weekend. His team mate Tommy Rustad won this must-win heat from second on the grid. Championship leader Thed Björk finished fourth.

Going in to the second heat Tommy Rustad and the Volvo team had closed the gap to four points to Flash Engineering driver Thed Björk in the drivers' championship and were also down to a gap of ten points behind the leader in team championship, the BMW team WestCoast Racing. Wedged in between was the other BMW team Flash Engineering six points ahead of Volvo and Polestar. With the reverse grid, meant Dahlgren started as fourth, Thed Björk as fifth, Tommy Rustad as eight and with Thed Björk's team mate Jan Nilsson behind on the inside lane as ninth. What followed was the most dramatic start of the season.

Within a time span of five seconds going in to the start corner, Jan Nilsson hit Tommy Rustad who got a wide slide but somehow managed to keep his car on the track. Jan Nilsson went off and ended his race in the sand trap. Almost simultaneously, Thed Björk pushed WestCoast Racing-driver Richard Göransson off to the grass in the exit of the same corner. Richard Göransson slid across the grass at high speed and back on to the track just before the next corner where he slammed in to the side of Thed Björk and took him and his own team mate Robin Rudholm out in the sand trap in a cloud of car debris and dust. Out from this dust, emerged Dahlgren as third and Rustad as fifth, both of them miraculously with their cars completely intact.

With both BMW teams parked on the beach, the Volvo team Polestar only needed to take Dahlgren and Tommy across the finish line as fourth and fifth to win both championships. Then Robin Rudholm managed to get out on track again and started chasing points in the team championship. Dahlgren responded by passing both cars ahead of him, won the race and secured the team championship. Tommy Rustad, still in a fifth spot, was continuously coached over the radio and did exactly what he needed. He finished fifth and secured the drivers championship.

"Wow what a dramatic and happy day! I am incredibly happy and proud to win the strongest racing championship in Scandinavia and for the biggest and finest brand here - Volvo" said a happy Tommy Rustad as the team dressed him up with a golden crown and boa.

Happiness knew now limits with Volvo and Polestar. Not only was the team and drivers championship in the bag, but the team had also become historic the very same morning. Volvo and Polestar became the first team to be quickest in all qualifying sessions over a STCC season since the series started fourteen years ago in 1996.

"Absolutely wonderful and fair too. We took all poles this season and we won half of all race heats. Rustad was also the driver that won most heats, five, with Dahlgren on second place with four. In the end, we could claim both titles with no regrets and we will now enjoy this moment to the fullest" said Christian Dahl, Team Manager for the Volvo team Polestar Racing.

The victory came in the end but Volvos ambition to build the world's best Super 2000 car at home with its local organization and Polestar meant an intense and rapid development program on cassis, aero and engine. In the initial stages of the season and during races, the project was victim of several engine problems which Volvo and Polestar remedied mid-season. Unfortunately, this denied Dahlgren a fight in the drivers' championship but did in the end lead to victory in both championships.

"I can not describe how proud I am of everyone involved in the project. The will, morale, and team spirit that encompasses this project, and especially when things do not go our way on track or when we are under pressure from media, is simply fantastic. In the end, we won because we work as a team and because we never give up" said Derek Crabb, Volvo Cars Motorsport Director.

Keywords:
Special Interests, Sponsoring
Descriptions and facts in this press material relate to Volvo Cars' international car range. Described features might be optional. Vehicle specifications may vary from one country to another and may be altered without prior notification.
Related Images
Sep 27, 2009 ID: 30825 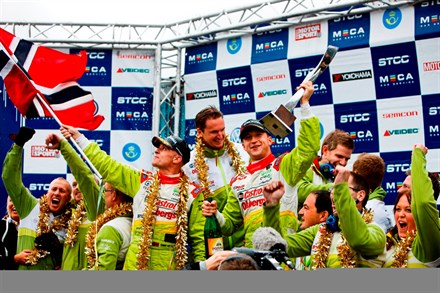