Making its debut in mid-2005, the XC90 V8 became the most powerful model in Volvo’s history. The transversely mounted, compact V8 was tailor-made for the XC90 using a 60-degree “V” configuration. It displaces 4.4-liters and features state-of-the-art technology with 32-valves and continuously variable intake and exhaust valve timing (CVVT). The naturally aspirated V8 develops 311 horsepower at 5,850 rpm and 325 lb.-ft. of torque at 3,900 rpm. In addition to providing premium SUV buyers with the power of a V8, the engine is also the first V8 to meet the stringent ULEV II emissions standards.

The XC90 V8 is fitted with equally new, standard six-speed Geartronic automatic transmission and All-Wheel Drive with Instant Traction™. The latter employs improved, computer-controlled Haldex AWD that instantaneously delivers up to 50 percent more torque to the rear axle only when needed, such as during takeoff. Instant Traction adds a one-way pre-charging valve to the AWD system that maintains a torque load of 59 foot-pounds, which is available instantly. Prior to Instant Traction, if the AWD system sensed that the front wheels were losing traction, one-seventh of a wheel rotation occurred before it began redirecting torque to the wheels with traction. That rotation could influence performance under certain conditions.

Also setting the XC90 V8 apart are V8 badges on the grille and tailgate, color-coordinated body-side moldings and mirrors, a graphite-gray grille, chrome-plated trim around the bumper air intake and twin exhaust pipes. A standard tire pressure monitoring system has been added for 2006.

Adhering to Volvo’s core value of safety, all XC90 models are equipped with Roll Stability Control (RSC), Dynamic Stability and Traction Control (DSTC), Side impact Protection System (SIPS) with side airbags and Inflatable Curtains for all three rows.

The XC90 is the largest vehicle in the Volvo lineup. A full 93.2 cubic feet of cargo capacity and over 9.5 feet of cargo length are available when the second and third rows and the front passenger seat are folded flat. Forward facing third row seats (standard V8; optional 2.5T) increase seating capacity to seven.

Keywords:
XC90 (2002-2014), Safety, 2006
Descriptions and facts in this press material relate to Volvo Cars' international car range. Described features might be optional. Vehicle specifications may vary from one country to another and may be altered without prior notification.
Related Images
Jun 20, 2005 ID: 2771 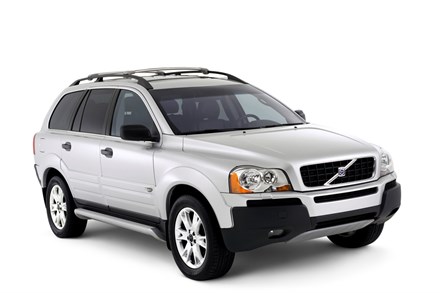