Irvine, Calif. (Jan. 9, 2009) - Volvo Cars of North America, LLC, today announced that it's upcoming entry in the small premium utility segment, the XC60, will be a 2010 model year. Set to arrive in Volvo retailers in March, the 2010 XC60 will be offered as a single well-equipped T6 AWD model featuring 281 horsepower and standard all-wheel drive with Instant Traction. Final pricing is expected to be announced late January with a base MSRP of less than $40,000.

Continuing Volvo's quest as a pioneer and leader in vehicle safety systems, the XC60 introduces a new world's first as standard equipment. City Safety is a driver support system aimed at preventing or mitigating collisions occurring at speeds of 19 mph or less. It utilizes a closing velocity sensor to help determine whether a collision is likely. Depending on the closing speed, City Safety will either pre-charge the brakes or automatically brake the XC60 to help avoid a rear-end collision or lessen its impact.

The XC60 is Volvo's first all-new carline to offer HD Radio as standard equipment updating radio to digital quality. FM broadcast quality improves to the level of a typical CD while AM broadcast quality is improved to the prior level of FM. The XC60's standard high performance sound system includes AUX and USB inputs to allow connection and control of personal music devices such as iPodsTM, memory sticks and other media players.

VCNA, part of Volvo Car Corporation of Gothenburg, Sweden, provides marketing, sales, parts, service, technology and training support to Volvo automobile retailers in the United States, and oversees Volvo operations in Canada. Volvo has been building cars with safety in mind for more than 80 years.

Keywords:
Volvo XC60, Special Interests, Mission, 2010
Descriptions and facts in this press material relate to Volvo Cars' international car range. Described features might be optional. Vehicle specifications may vary from one country to another and may be altered without prior notification.
Related Images
Oct 06, 2008 ID: 17526 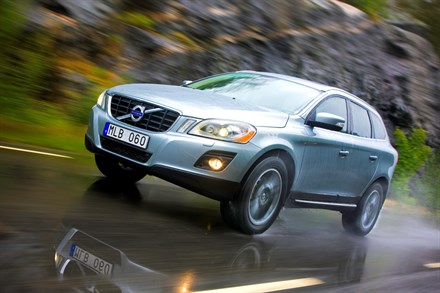