IRVINE, CA (December 29, 2004) - What is the ideal age to teach children about automobile safety? If the multi-year marketing partnership between Volvo Cars of North America (VCNA) and LEGOLAND California is any indicator,...then even beginning with pre-school is not too soon.

According to the agreement announced today, Volvo Cars, the recognized leader of safety in the auto industry, will partner with LEGOLAND California to bring messages of driving safety and awareness to the California theme park's 1.3 million annual visitors.

"At Volvo, we pride ourselves on building safe cars, however we're also beginning to focus on other aspects that are integral to safety on the road: the driver, and the passengers," said Vic Doolan, president and CEO of Volvo Cars of North America. "By encouraging safety as a learned behavior at an early age, we all benefit. LEGOLAND, and its target audience, is an ideal fit for influencing future drivers, as well as current ones, through their children."

Two specific LEGOLAND® programs are already underway: The Driving School (ages 6 to 13) and the Jr. Driving School (ages 3 to 5). These popular park attractions offer children the opportunity to drive electric-powered vehicles made to look like LEGO bricks within the controlled environment of the drive course. The rules of the road are emphasized, as well as good safety habits such as buckling up seatbelts. As part of the partnership, the schools will be bear the Volvo name.

"We specialize in family education and entertainment," said John Jakobsen, president and GM, LEGOLAND California. "Our partnership with Volvo, brings the type of quality and reputation that our visitors expect from their experience in the park. We could almost consider our driving programs a public service, in addition to fun and adventure," he said.

Volvo will become the "Official Car" of LEGOLAND, and work with the theme park to develop innovative safety awareness activities.

"The partnership is a natural extension of our two family-oriented brand names," said Doolan. "It's also a logical addition to our "Drive For Life" initiative that focuses on affecting driver behavior and safety. In working with LEGOLAND, it's never too early to learn about the rules of the road."

Coincidentally, the names of the two companies both have similar linguistic roots. Although it's derivation is Danish,...LEGO in Latin means "I put together" or "I assemble." The origin of the word VOLVO is Latin for "I Roll." An apt lineage for an agreement featuring drivable vehicles made of interlocking bricks.

LEGOLAND California is a 128-acre park geared specifically towards youngsters ages two through 12. With more than 50 family rides, "hands-on" attractions and shows, LEGOLAND California provides education, adventure and fun in this first park of its kind in the United States.

In addition to LEGOLAND California, there are three other LEGOLAND parks in the world - LEGOLAND Billund in Denmark; LEGOLAND Windsor, outside of London; and, LEGOLAND Deutschland in Germany.

Keywords:
Product News
Descriptions and facts in this press material relate to Volvo Cars' international car range. Described features might be optional. Vehicle specifications may vary from one country to another and may be altered without prior notification.
To view the full copyright information click here
Related Releases 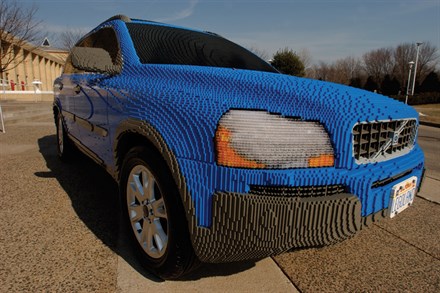