Volvo Cars is the first car maker to integrate the hugely popular Spotify music streaming service globally in its new cars, starting with the new Volvo XC90, S90 and V90 this spring it was announced at Mobile World Conference in Barcelona.

The Swedish car maker has worked closely with the popular streaming music service to ensure a natural and familiar user interface in the car. The integration takes advantage of Spotify’s most appreciated features using the large real-estate of the tablet-like touch screen in the new XC90, S90 and V90 and does away with the need to use a smartphone for music streaming while on the road.

“Anyone that has used Spotify knows how great it is – you have access to your favourite music, all the time. We are very proud of our unique and custom-made interface for Spotify,” said Björn Annwall, Senior Vice President Marketing Sales and Service at Volvo Cars.

“As before you can still play music from your Spotify smartphone app in your car, or you can use the in-car app, which will contain all of your favourite playlists, artists and albums. And with Spotify’s ability to deliver extremely high quality streaming it has never been a better time to get the most out of the Bowers & Wilkins sound system in our new XC90, S90 and V90,” concluded Björn Annwall.

At present Spotify is also available to stream in Volvo cars via Bluetooth or through Apple CarPlay. However the native application in Volvo Cars’ Sensus user interface in the new XC90, S90 and V90 provides a much richer experience and a search functionality that non-native applications cannot deliver.

Volvo’s integrated Spotify application includes the much appreciated Spotify Connect functionality, which allows passengers to use their mobile devices as remote controls for the Spotify in-car app without the need to connect their devices to the car or drain their batteries.

Keywords:
Technology, 2017, 2018, S90, V90
Descriptions and facts in this press material relate to Volvo Cars' international car range. Described features might be optional. Vehicle specifications may vary from one country to another and may be altered without prior notification.
To view the full copyright information click here
Media Contacts
Related Images
Feb 22, 2016 ID: 175771 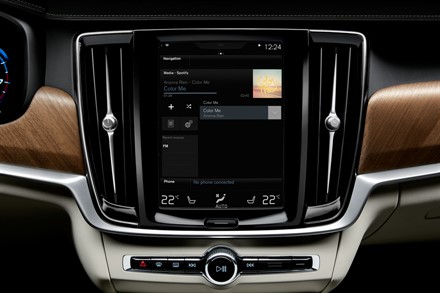