The eagerly-awaited Volvo V90 was revealed today in Stockholm, Sweden. The stylish and versatile V90 is the latest in the luxury car maker’s top-of-the-line 90 series sitting alongside the award winning XC90 SUV and the recently-launched S90 luxury sedan.

Building on Volvo Cars’ indisputable heritage in the wagon segment, that began over 60 years ago with the Volvo Duett, the new V90 takes the luxury wagon a clear step forward in terms of aesthetics, materials and finish, while living up to the ultimately practical nature of any true wagon.

“We have a very strong position in the wagon segment,” said Håkan Samuelsson, president and chief executive of Volvo Cars. “In many people’s minds we are known as the definitive wagon brand. While the Volvo brand today stands for more than wagons, we are proud to carry forward this rich heritage with the V90.”

The new V90 is the third car unveiled in Volvo’s top-of-the-line 90 series, all of which are built on the company’s specially-designed and fully modular Scalable Product Architecture (SPA), which has opened up a range of new opportunities in terms of how Volvos can be designed, built and equipped.

“The modern luxury wagon is all about the intriguing combination of a luxurious experience with the functional origins of the wagon silhouette. The sophisticated ambience of our new Volvo Interiors is combined with a great cargo space, providing the right kind of functionality – whether through connectivity or cargo and storage solutions,” said Thomas Ingenlath senior vice president for design at Volvo Cars.

Volvo Cars has also worked tirelessly on driving dynamics in the new model delivering a totally new and refined driving experience characterised by a sense of engaging control and predictability.

“We have a very strong offer in the V90. The T8 Twin Engine gas plug-in hybrid will deliver around 400 hp and a pure electric range of around 50 km,” said Dr Peter Mertens, Senior Vice President Research & Development at Volvo Cars.

The new Volvo V90 is scheduled to arrive in the United States in 2017.

Keywords:
Corporate News, 2017, 2018, V90, Product News
Descriptions and facts in this press material relate to Volvo Cars' international car range. Described features might be optional. Vehicle specifications may vary from one country to another and may be altered without prior notification.
To view the full copyright information click here
Media Contacts
Related Images
Feb 18, 2016 ID: 173876 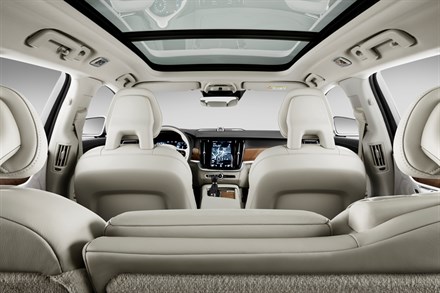