The Volvo XC90 sport-utility vehicle represents the company's first foray in the mid-size premium SUV market. With its attractive styling, exemplary handling characteristics and innovative safety features, the XC90 marked the introduction of the next-generation of sport-utility vehicles.

All new in 2003, the 2004 XC90 sees only minor changes. A new optional leather gearshift knob adds a touch of class inside, and the flip-and-fold key-integrated remote combines remote locking/unlocking and the ignition key in one smart package. Two new alloy wheel styles are also available, as is one new exterior color, Ice White.

Adhering to Volvo's core brand values of safety, environmental consciousness and value, the XC90 intorduced no fewer than five automotive world firsts: Roll Stability Control (RSC), an inflatable side curtain for all three rows of seats, an integrated sliding center booster seat for children, seatbelts with pretensioners in all seating positions and the availability of a Dolby 5.1 Pro Logic II surround sound stereo system featuring a 305-watt Alpine amplifier and 12 premium speakers.

Built off the venerable P2 large-car platform that is also utilized by the flagship S80 luxury sedan, the XC90 is the largest vehicle in the Volvo lineup. Unitized construction increases torsional rigidity and helps to reduce noise, vibration and harshness. Volvo's unique vehicle architecture mounts the engine transversely, allowing increased room within the passenger compartment for an optional third-row of seats, boosting seating capacity to seven. A full 93.2 cubic feet of cargo capacity and over 9.5 feet of cargo length are available when the second and third rows and the front passenger seat are folded flat. Adding to the vehicle's versatility are no less than 64 seating configurations, more than any other of the XC90's competitors.

Maximizing interior versatility is what sets the XC90 apart from other SUVs in its class. Optional forward facing third row seats, offered as part of the Versatility Package, increases seating capacity to seven. Also included are separate controls for the rear air conditioning unit and audio systems. A unique feature of the XC90's second row seats (when ordered with the Versatility Package) is that the 40/20/40 bench seat is adjustable fore and aft, affording more room for the third-row passengers. When not in use, the third row folds flat below the cargo floor, increasing luggage capacity without the hassle of lifting a heavy seat out of the vehicle. The center portion also incorporates a child booster seat, and when slid into the forward position allows the child to better interact with the front seat occupants.

As with other all-wheel-drive Volvos, the XC90's system operates seamlessly and is invisible to the driver. Created by Haldex and specifically tuned to meet the demands of the XC90, power is transferred automatically between the front and rear wheels, depending on available traction. Under normal conditions, 95 percent of the engine's power is sent to the front wheels. If slippage is detected and the front wheels lose traction, a multi-plate clutch located in the rear differential engages and instantly begins routing up to a maximum of 65 percent of the power to the rear wheels. Engagement of the all-wheel-drive system is extremely fast, allowing just 1/7th of a wheel rotation before power begins being diverted to the wheels with the most traction.

With a wheelbase of 112.6 inches, 2.7 inches longer than the S80 luxury sedan, and an extremely wide track of 64.3 inches front and 63.9 inches rear, the XC90's ride is compliant and controlled even when driven over rough or uneven road surfaces. The independent MacPherson strut front suspension coupled with a ZF steering gear allows sharp, precise response. The fully insulated multi-link independent rear suspension filters noise and vibration for a quieter ride.

XC90 buyers will be around 46 years old. A majority of them will most likely be married with a median income around $175,000. About 40 percent of them will already own three or more other cars and more than half, 57 percent, will be women.

Keywords:
XC90 (2002-2014), 2004
Descriptions and facts in this press material relate to Volvo Cars' international car range. Described features might be optional. Vehicle specifications may vary from one country to another and may be altered without prior notification.
Related Images
Sep 18, 2003 ID: 1354 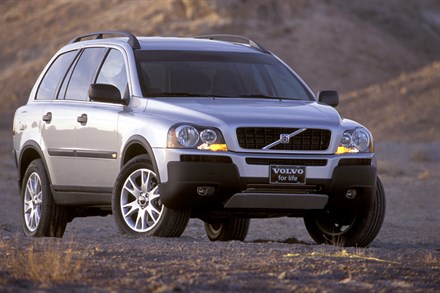 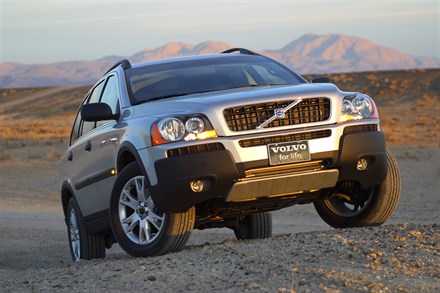