The all-new Volvo XC90, which will be revealed later this year, will offer one of the top audio systems available in the automotive world after engineers at the Swedish car company joined forces with their counterparts at the renowned British audio equipment company Bowers & Wilkins.

The engineers at Volvo Cars’ audio department and Bowers & Wilkins share a commitment to the highest standards of audio quality, and they were driven to make the sound system in the XC90 stand shoulder to shoulder with the best currently available in the automotive market. This is also clear from a design integration perspective with a uniquely sculpted tweeter placed prominently on the dashboard.

“In my book the Premium Sound in the all-new XC90 is one of the top three audio systems in the automotive world,” said Michael Adenauer, former music producer and audio expert at Volvo Cars.

Volvo Cars decided that Bowers & Wilkins was its ideal partner. The UK firm was established in 1966 by two friends who shared an obsession to build the perfect loud speaker. This heritage has created a globally-respected high-end audio company, renowned for its technological innovations, many of which have been incorporated into the XC90.

The audio innovations in the XC90 include one of the first automotive applications of an air-ventilated subwoofer integrated into the body of the car rather than being a freestanding box that is simply bolted to it.

“The subwoofer design is integrated into our new Scalable Product Architecture and is possibly a world first in the automotive industry,” said Adenauer. “This increases the subwoofer’s capacity to pulse more air, which enables extremely low bass tones all the way down to 20 Hz. In principle, it turns the whole interior space in the car into a giant subwoofer.”

The XC90’s new audio system also uses the latest and most advanced sound processing software from the specialist Swedish audio company Dirac Research, which manages the timing of the sound and cooperation between the speakers to optimize the sound for a specific, or all seating positions, and can also create individual acoustics from certain music venues or concert halls.

In the XC90, the software has been used to re-create the exact acoustic qualities of Gothenburg Concert Hall, located in Volvo’s home town and home to the Gothenburg Symphony Orchestra, the National Orchestra of Sweden. A simple change in the center touch screen that controls all the car’s features and the system will immediately alter its settings to mirror this concert hall, a recording studio or a stage environment.

The top-of-the-line Bowers & Wilkins Premium Sound is one of the system levels available for the XC90. The audio range also includes the High Performance system with a 224W amplifier, 12 speakers and the possibility to add the fresh air subwoofer.

Keywords:
XC90, Product News
Descriptions and facts in this press material relate to Volvo Cars' international car range. Described features might be optional. Vehicle specifications may vary from one country to another and may be altered without prior notification.
To view the full copyright information click here
Related Images
Jun 05, 2014 ID: 147106 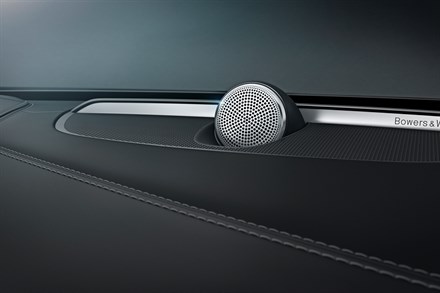