ROCKLEIGH, N.J. (March 10, 2014) - Volvo Cars has won a coveted ‘hat-trick’ of awards after its new Concept Estate concept car was named ‘Car of the Show’ by several international media.

The three consecutive awards underline the dramatic transformation currently underway at the Swedish car maker, overseen by Thomas Ingenlath, senior vice president design at Volvo Cars. The transformation is inspired by the simplicity, functionality and beauty that has become the hallmark of Scandinavian design.

The Volvo Concept Estate’s most striking interior design feature is its simplicity. Gone are the buttons of yesteryear to be replaced by a large tablet-like touch screen control panel in the center console, bringing the interior firmly into the 21st century.

“The basic idea is to organize controls and information in a perfectly intuitive and user-friendly way. Everything is exactly where you expect it to be, making the drive more enjoyable, efficient and safe,” says Ingenlath.

“Not having to deal with buttons and controls for a growing number of functionalities is like being freed from a pair of handcuffs,” says Robin Page, design director interior at Volvo Cars. “This has made it possible to build a beautiful interior architecture around the portrait screen. The concept car showcases how this user interface will be integrated in our new car generation.”

Building on the unveiling of Volvo’s new interior design and center console display, Volvo Cars and Apple Inc. announced in Geneva that the companies are joining forces to offer Volvo drivers full access to Apple’s widely used and hugely admired operating system in their own cars.

Via Apple CarPlay, the alliance enables the driver to experience and use the content of their Apple device through Volvo Cars’ center console touch screen display. The first Volvo to offer Apple’s operating system will be the all-new XC90 which will be introduced later this year. 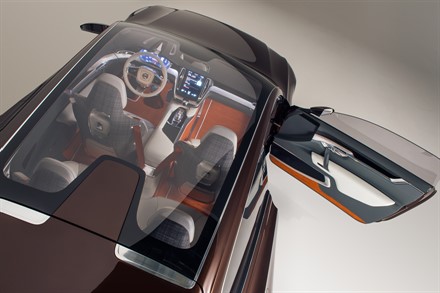