...two million Volvos with airbags have been sold in U.S.

Irvine, CA(April 3, 2007) - Today all passenger vehicles have some form of airbag. In many cases airbags are even selling points. Statistics support the value of these safety devices. According to the National Highway and Transportation Safety Administration (NHTSA), the lives of nearly 20,000 passengers have been saved directly attributed to airbags, since 1987.

Volvo had worked with airbags and automatic seat belts for many years (the world's first three-point seatbelt was also a Volvo innovation). As early as the 1970s, Volvo engineers were experimenting with the airbag as a way of reducing fatalities, even producing a fleet of cars with airbags as part of their research. At the same time, the U.S. the government was struggling with legislation regarding the use of seat belts.

However it wasn't until 1984 that Volvo formed a project team of engineers, system developers and suppliers to begin its first SRS project. That same year, 1984, then Secretary of Transportation Elisabeth Dole issued a final rule mandating air bags and/or automatic seat belt restraints in all automobiles built after 1990. Volvo rolled out its airbag-fitted production model three years ahead of U.S. law.

Throughout the process, FMEA analysis and component testing were implemented to minute detail.  Working with Petri AG, the supplier of the steering wheel and airbag unit, Volvo refined the foam in cover, the split line.  Volvo designed the shape, and size of tablets, which provided for proper gas generation with a sodium azide (NaN3) chemical mix.

A gas generator screen/filter helped maintain a proper balance with the pure nitrogen gas and helped collect the inert, but very hot, residue within the gas generator - not in the bag itself.  Facilitating deployment of the apparatus, Volvo worked with the igniters and bags as well as the weavers of the fabric and the manufactures of the yarn.

With Bosch, the supplier for the electronics, Volvo developed a unique sensing device - the piezo electric.  Contrary to most mechanical sensors of the time which were located in the bumper area, this new technology enabled a system where sensing could be positioned inside of the vehicle under the driver's seat. The sensor mechanism could be shorter and the cables and connectors were better protected.

The basic concept is still intact at Volvo. However the main sensor has morphed through technology and research to a position behind the gearshift lever, which first appeared on the 1991 Volvo 850.

In 1999, Volvo continued to lead the field by installing a new generation of airbags. These devices, now known in the industry as "smart airbags," sense such things as body weight, speed at impact, and impact angle, to adjust the force of airbag deployment automatically. These "smart bags" offer yet another level of protection above conventional bags by automatically "sensing" when to step down the force of impact, thereby reducing the risk to the vehicle's most important cargo -- the people riding inside the car.

Volvo Cars are currently equipped with a dual threshold system based on impact position relative to the part of the body being protected. Airbag technology, and the obvious safety the systems represent, has evolved to not only include driver and passenger front, but various forms of rear seat passenger, side-impact and roll-over protection as well.

These sophisticated systems constantly monitor all kinds of data, preparing the motorist for an impact which, in the life of most motorists, never occurs.

Statistics show that when airbags deploy during a crash, the likelihood of fatalities is significantly reduced when the airbags are combined with lap/shoulder restraints.

Volvo maintains that the airbag is a supplement to the seat belt in driver and passenger protection, and is representative of the holistic approach to safety that characterizes the brand.

It is important to remember the ABCs of safe airbag use:

NOTE: Volvo Cars standpoint is that an airbag is a (SRS) Supplementary Restraint System to be used in combination with seatbelt. The safety belt is the primary restraint system in the car and offers protection in a wider range of crash situations.

Keywords:
Safety
Descriptions and facts in this press material relate to Volvo Cars' international car range. Described features might be optional. Vehicle specifications may vary from one country to another and may be altered without prior notification.
Related Images
Nov 06, 2006 ID: 4699 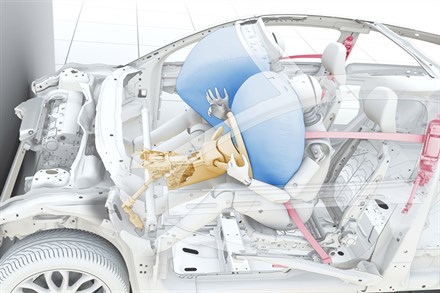 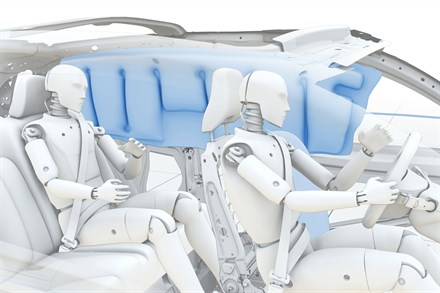