IRVINE, CA. (October 21, 2002) - Volvo Car Corporation is producing a new gasoline engine that complies with California's 2003 PZEV (Partial Zero Emission Vehicles) standard - the toughest in the world - and will allow several Volvo models to be sold in the state in the same category as zero-emission electric vehicles.

The new technology, which earned Volvo's development team the 2002 Henry Ford Technology Award, produces emissions that are lower in hydrocarbons and nitrogen oxide than the air going into the engine. In other words, the car actually purifies the air, ridding it of these pollutants.

In production since September, the new 2.4-litre, five-cylinder engine will be installed in Volvo V70 and S60 models sold in California.

"Apart from the exciting challenge of developing the systems which we have now introduced, the project has generated valuable technical spin-off," says Sten Sjöström, project manager responsible for new emission control concepts at Volvo Car Corporation in Sweden.

"We can also apply the experience gained to other Volvo models and in other markets where the regulations are less strict. In this way, we will be able to produce cleaner cars all over the world at a reasonable cost."

Starting next year, all auto manufacturers selling cars in California must include a specified percentage of zero-emission vehicles in their lineups. Legislators first envisioned that these would be electric vehicles (ZEVs or Zero Emission Vehicles), but they subsequently decided to permit other technologies - such as 'ordinary' gasoline engines, hybrids and natural gas - provided emission levels are as low as those of electric cars, including production of the electricity. These cars are described as Partial Zero Emission Vehicles or PZEVs.

Emissions of toxic hydrocarbons from Volvo's PZEV vehicles have been reduced to less than a thousandth of the levels from cars produced 30 years ago.

The keys to the Volvo PZEV's performance include a method of quickly heating the car's catalytic converter after cold starts and a modified fuel system and fuel tank that reduce evaporative emissions to almost zero.

At least 90 percent of all emissions from a car are emitted from the exhaust pipe within the first minute of starting. Once the catalytic converter is hot, the emissions basically drop to zero.

To solve the cold-starting problem, Volvo engineers developed VVT (Variable Valve Timing), which enables the car to be started with excess air - in other words, with a lean mixture, or 'negative choke.' This enables large quantities of air to be heated, bringing the catalytic converter to working temperature very quickly. New software has also been developed to control the starting sequence with a high degree of precision.

Volvos with PZEV have two catalytic converters, the first of which is installed close to the engine, immediately downstream of the exhaust manifold. This also contributes to rapid activation of the unit.

Performance and fuel consumption are not adversely affected by PZEV.

Evaporative emissions are largely hydrocarbons that evaporate not only from the fuel system, but also from the tires, body and air-conditioning system. As a result of Volvo's development work, evaporation from the Volvo PZEV has been reduced to almost zero.

All components are manufactured to ensure long durability in view of the length of the guarantee. VCC has been conducting comprehensive, accelerated endurance tests to assure the operation of the complete emission purification system for as long as 15 years or 150,000 miles.

For the moment, only Volvo cars sold in California will be equipped with the PZEV system, but several engines currently under development will also be equipped with the technology. Volvo expects to widen its availability as more units are produced and the costs drop accordingly.

For animation of comparative system, please visit our AV library.

Keywords:
Technology, Special Interests
Descriptions and facts in this press material relate to Volvo Cars' international car range. Described features might be optional. Vehicle specifications may vary from one country to another and may be altered without prior notification.
Related Images
Sep 18, 2003 ID: 1057 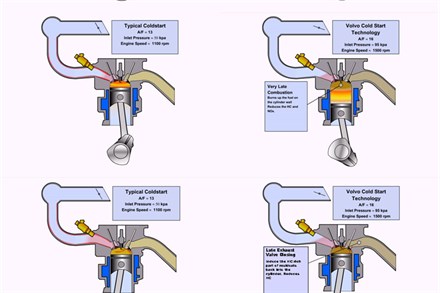