Featuring: Prodigy, Fatboy Slim, Pendulum (live), Magnetic Man, Professor Green a lot of bands, DJs, Plus Comedy and much more. There will also be a Volvo Ice Camp Party and a Volvo Road Trip.

The official* ‘Best European Festival' and the original and greatest snowboard and music festival in the World;  ‘Snowbombing' has partnered with design driven Volvo Cars for the second year running, this year announcing a pan-European headline sponsorship deal.

Gareth Cooper MD from Volvo Snowbombing commented: "We see Volvo and Snowbombing as a perfect fit - both super cool brands pushing boundaries in their individual fields. Some of the activity that's going to take place is going to blow people away, and this year Volvo will integrate into the event fully, providing even more fun and entertainment for our ever growing crowd!"

Kylee Rush, Head of Brand Engagement Volvo Car Europe "Volvo Car Europe is very excited to announce its 2011 headline partnership with Snowbombing, now called Volvo Snowbombing. Snowbombing, like Volvo, is a brand on-the-move and we share many similar values making the headline partnership an ideal match. With innovatively designed luxury cars created with people at the forefront of everything we do it means that Volvo's seamless integration with the event will add even more fun and adventure to Snowbombers."

Volvo Snowbombing is now regarded by many as, "The Greatest Show on Snow" - where seeing the likes of The Prodigy and Fatboy Slim playing sets 630-meters above sea level and partying in an igloo is just part of the amazing array of fun and entertainment on offer.

With Volvo Car Europe on board, a new dimension is now being revealed, with the Volvo Ice Camp Party, bringing together party-goers and media from all over Europe for a truly international event within the festival with top class artists taking to the stage.  Taking place on Thursday 7th April, Volvo will be whisking away 250 lucky competition winners and special guests from the main resort hub of Mayrhofen on a magical mini trip to the Volvo Ice Camp at Kitzsteinhorn Glacier in Kaprun, where breathtaking views meet stunning design in this highly original car showroom come party venue. Guests will experience four huge igloos, including showroom space showcasing the latest designs and innovative technology from Volvo, including the all-new Volvo S60, designed with a true sports car feel and the Volvo V60. Exclusive sets from world class acts will provide the entertainment with a stellar line up soon to be revealed, whilst people can chill out at the Ice Bar.

250 cars setting off
Volvo Cars will also be bringing over guests from UK, Germany, Belgium, Switzerland, the Netherlands and Italy to join the party via the now famous Volvo Road Trip that kicks off the festival. Snowbombing regulars, special guest artists and celebrities will be driving from all across Europe en route to the festival for a leisurely European adventure. 2011 sees the pan-European expansion of the Volvo Road Trip - in addition to the 100 cars setting off from Volvo in Maidstone UK, the Volvo Road Trip will also take off from start lines in Germany (Berlin), Holland (Amsterdam) and Italy (Milan).  A total of 250 cars.

Putting a unique twist on festival travel expect fancy dressed inspired cars, customised vehicles and Volvo's own 21st Century Luxury VIP car fleet, arriving from all over Europe. The cars will meet triumphantly and form a parade through the centre of Mayrhofen for the ultimate hero's welcome as the crowds line the streets, flags are waved and the music plays, courtesy of the Volvo Snowbombing Oom-Pah Band - a most memorable chequered flag moment!

Volvo Snowbombing is Europe's premier festival for music and fun on the slopes. With more than ten entertainment arenas including an outdoor Forest Stage, 3 Mountain Stages, a new Comedy venue and Austria's largest Street Party, expect a unique take over of the entire resort of Mayrhofen for a week of hedonistic adventure and extreme sport. The resort also boasts some of Europe's most lavish spas so you can also relax and enjoy the amazing spring sunshine and snowy mountains of one of Europe's most snow-sure, late season resorts.

The festival itself 4-9 April

Volvo Ice Camp opened on January 15th, 2011, and is situated at Kitzsteinhorn Mountain, Kaprun. For the fifth year, a giant igloo landscape for hundreds of thousands of mountain tourists and probably the world's highest-elevation but definitely the "coolest" showroom for the new Volvo S60 R-Design were built in the Salzburg Alps.

A giant world made from snow and ice, consisting of four inter-connected main igloos and seven cozy sleep igloos, was created between the peaks of the Kitzsteinhorn Mountain.

For more information on Volvo Snowboming please check out http://www.snowbombing.com/

For more information and to follow the activities at the ICE CAMP go to: http://www.volvo-ice-camp.com/ or www.facebook.com/VolvoICECAMP

Keywords:
Events/Activities, Special Interests, Sponsorship
Descriptions and facts in this press material relate to Volvo Car UK's car range. Described features might be optional. All information is correct at time of going to press and may be altered without prior notification.
Related Images
Jan 26, 2011 ID: 36347 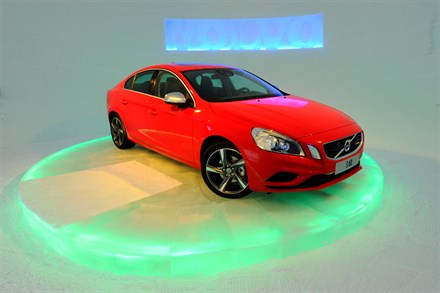 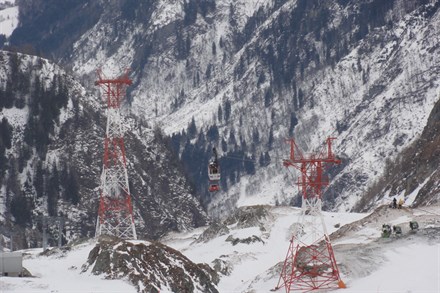 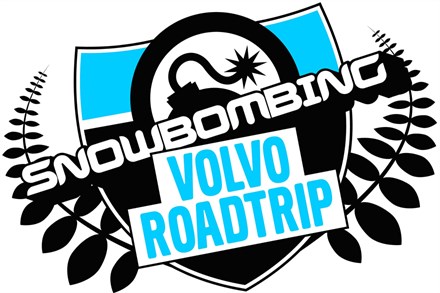