• The XC60 was praised for its infotainment, interior quality and driving appeal

The Volvo XC60 has been crowned overall Car of the Year at the UK Car of the Year Awards 2018. This comes only a month after it was crowned Best Medium Crossover by the same judges.

The UK Car of the Year Awards recognise the best new cars on sale in the UK. The awards are judged by 27 leading UK motoring journalists, who all write for influential titles such as The Sunday Times, The Independent, The Telegraph, Top Gear, Auto Express, CAR, Honest John.co.uk, Auto Trader and Motoring.co.uk.

John Challen, Editor and Managing Director of the UK Car of the Year Awards, said: "The XC60 being crowned UK Car of the Year 2018 is very well deserved, at a time when crossovers are becoming increasingly popular. Having been runner-up in 2016 with the XC90, it's fantastic to see Volvo now claim the top spot with its smaller – but every bit as impressive – stablemate."

The XC60 offers class-leading connectivity. Volvo's innovative nine-inch touch screen control system is fitted as standard across the range. The intuitive system means the car's important functions and apps are only a swipe or click away. Using Apple CarPlay and Android Auto, you can even access your phone's key functions such as calls, messages and music directly from the interface. UK Car of the Year judge Anthony ffrench-Constant agreed, commenting: "The Volvo takes it for the quality of its interior and infotainment."

Fellow judge Ian Lynas praised the XC60 further, saying: "Amid a sea of crossovers, the new Volvo XC60 has emerged a winner with its build quality, high level of technology and, above all, sheer driving joy."

Volvo's semi-autonomous Pilot Assist system is available across the XC60 range. This technologically advanced safety system takes the strain out of long car journeys by assisting the driver with braking, steering and accelerating, while keeping the car a safe distance from any vehicle in front. This system indicates Volvo's clear steps towards fully autonomous cars.

The XC60 also features many ground-breaking safety systems, including Steer Assist which helps with the steering to avoid potential collisions, and Oncoming Lane Mitigation which will steer you back into your lane should you inadvertently begin to drift out of it. Both systems are new to the mid-size SUV segment and highlight Volvo's forward-thinking approach to safety.

Jon Wakefield, Managing Director of Volvo Car UK, said: "Winning both the overall UK Car of the Year and Best Medium Crossover awards is a fantastic accolade for Volvo. The awards reflect the desirability and sophistication of the XC60.

"The XC60's elegant Scandinavian design, cutting-edge technology and luxurious equipment levels have proved a big hit with customers, continuing the XC60's success story in the UK."

For more information on the Volvo XC60, and to use the online configurator, please go to www.volvocars.com/uk/cars/new-models/new-xc60

Keywords:
2018, XC60, Product News
Descriptions and facts in this press material relate to Volvo Car UK's car range. Described features might be optional. All information is correct at time of going to press and may be altered without prior notification.
To view the full copyright information click here
Media Contacts
Related Images
Feb 23, 2018 ID: 224969 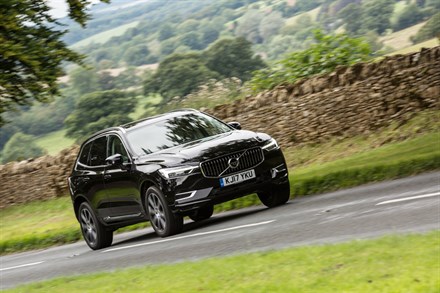