Nov. 25 -The Volvo Cars team are celebrating, after winning ‘Best use of Broadcast Media' at the CorpComms Awards in London. The award recognised the coverage achieved surrounding the Geneva Motor Show earlier this year where the team secured interviews and coverage across all of the main European TV stations and broadcast direct to fans through Volvo Car's Facebook page. The long-running and well respected CorpComms Awards recognise the best in UK and European communications across the public, private and Third Sector.

At the time of the motor show, media coverage was dominated by product recalls and falling car sales. Together with its partner Ogilvy Public Relations, Volvo Cars took the decision to embrace the debate when launching its new S60 model, linking the launch of its unique pedestrian detection system to safety and the imminent buyout by China's Zhejiang Geely Holding Group to business growth.

The integrated campaign used both traditional broadcast PR and online video techniques. TV stations across Europe were provided with interview opportunities and a video news package, which was fed via satellite direct from the venue. Meanwhile, fans of Volvo on Facebook were provided with behind the scenes updates direct from the event, plus exclusive video material including interviews, car tours and the opportunity to put their questions direct to key Volvo personnel.

In total, 66 separate TV and online reports were generated across the whole of Europe, totaling nearly two hours of footage and reaching more than 61 million people with the Volvo messaging. Online activity led to an increase in the number of Volvo fans on Facebook from 67,000 to almost 94,000. One video alone generated more than 4,000 interactions with Volvo's fans on launch day and interactions topped 6,700 interactions throughout the ten day event.

The CorpComms judges said Volvo 'owned the debate' with its 'excellent campaign and stand out results'. Peter Ganjbar, Volvo Car's Manager of Broadcast and Social Media Relations said, "This award comes off the back of a  DigiCorpComms Award won earlier this year for ‘Best use of Facebook'", again with our partner Ogilvy PR.

"Our approach of combining traditional broadcast coverage with two-way communication online is really resonating with audiences and fans", Peter Ganjbar contiunues. "This latest award further emphasises our commitment to embracing cutting edge communication techniques, which ensure that we bring audiences a truly immersive brand experience. The Management, Volvo Car Corporations spokesmen, staff and Ogilvy PR team are committed to this concept and we're all very excited for what's coming in 2011 and beyond." 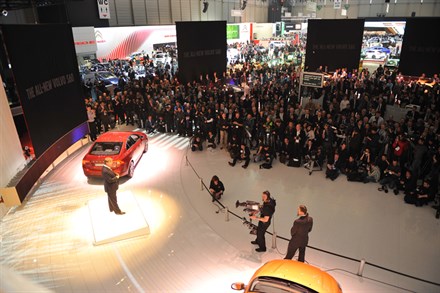