The advent of autonomous driving technology means that the relationship between a driver and a car’s user interface is of crucial significance. A safe and seamless handover of control is the cornerstone of any new trustworthy AD technology.

When autonomous driving is no longer available, the driver is prompted to take over again. A sixty-second countdown is displayed.

Keywords:
Safety, Technology
Descriptions and facts in this press material relate to Volvo Cars' international car range. Described features might be optional. Vehicle specifications may vary from one country to another and may be altered without prior notification.
To view the full copyright information click here
Media Contacts
Related Images
Oct 05, 2015 ID: 167752 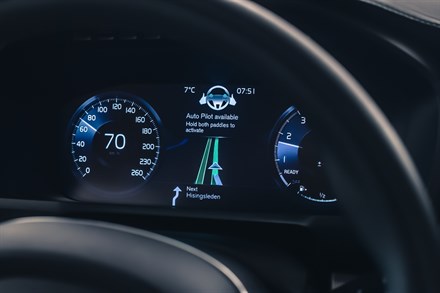