Volvo Cars, world-renowned Swedish football star Zlatan Ibrahimović and leading pop music producer Max Martin now join forces to celebrate Sweden in an exciting new marketing campaign. The cooperation between the three Swedish icons is based on a shared will to highlight Sweden’s nature and people.

“Sweden means a lot to Volvo. With this campaign we want to celebrate Sweden and spirit that is the reason why we are able to lead in areas like safety, design and environment. And we are extremely proud to do this together with Zlatan and Max Martin”, said Åsa Borg, Marketing Director at Volvo Cars Sweden and coordinator for the campaign.

Zlatan Ibrahimović, better known by his fans as simply ‘Zlatan’, is the biggest football star that Sweden has ever known and one of the best players currently in the game. He won league titles with world-class teams like Barcelona, Juventus, Internazionale, AC Milan, Paris Saint-Germain and Ajax and was chosen as Swedish footballer of the year no less than eight times. He is also the captain of the Swedish national football team.

The campaign that brings together Volvo Cars, Zlatan and Max Martin was inspired by the earlier Volvo Cars/Swedish House Mafia cooperation. But this time the film for the campaign has been shot in the northern part of Sweden, together with Zlatan, his wife and their two sons.

The Volvo XC70 features prominently in the film, while the music is written and produced by Max Martin as a modern interpretation of the Swedish national anthem, performed by Zlatan who is reciting the lyrics.

The campaign with the XC70 is primarily aimed at the Swedish market, but Volvo Cars will also produce an additional film featuring the Volvo XC60 for international use. The campaign will be rolled out into additional markets over the coming weeks and months.

“This project is something I have joined with all my heart. I always loved cars, and when you have a family Volvo is the perfect choice. This celebration to Sweden is going to be a memory for life. And the end result, with this new version of Sweden’s national anthem, is just magic,” said Zlatan Ibrahimović.

“Volvo, Zlatan and Max Martin are all part of a modern global society. But we all find our inspiration, peace at mind and recharge our batteries in Sweden. That’s why we have created this celebration to Sweden’s nature and people,” said Åsa Borg.

Keywords:
Corporate News, 2015, XC70 (2008-2016), Product News
Descriptions and facts in this press material relate to Volvo Cars' international car range. Described features might be optional. Vehicle specifications may vary from one country to another and may be altered without prior notification.
To view the full copyright information click here
Media Contacts
Related Images
Jul 25, 2014 ID: 138475 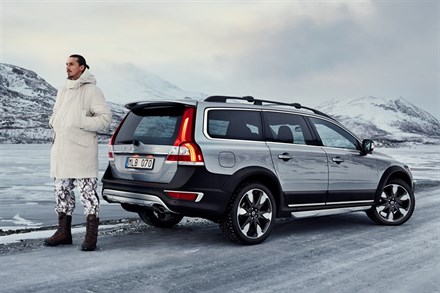