Volvo Cars is using a new advertising campaign for the bestselling XC60 to honour its diverse and growing workforce.

The campaign follows in the footsteps of the successful ‘Made By Sweden’ theme that Volvo Cars has been using in recent times. But this time, instead of using heroes such as footballing legend Zlatan Ibrahimović and pop icons Robyn and Avicii to build brand awareness, the Swedish car maker has chosen to highlight its own heroes – its workforce.

“A diverse workforce delivers many benefits. Different approaches and critical thinking are vital when creating something new. You just need to consider the huge success of the award-winning XC90 and our record sales in 2015 to understand the impact that diversity has at Volvo. We believe that a large part of Volvo’s continuing success can be attributed to diversity and what we call the Volvo spirit,” said Björn Annwall, Senior Vice President, Marketing Sales and Service at Volvo Cars.

The distinctive blend of smart functionality, leading safety and progressive design that embodies Volvo’s approach to creating premium cars is based on the Swedish car makers’ strategy of delivering products that understand, support and improve peoples’ lives.

“Our workforce is growing by the year as our sales increase. At the moment we have close to 50 nationalities actively contributing to the design, development, marketing, sales and service of our cars. Diversity is not just about age, gender, sexual orientation or ethnicity - it’s about harnessing the knowledge, experience and personalities of the people that come to work with us. We believe that diversity delivers better products,” concluded Björn Annwall.

Volvo employees from different backgrounds, working across the company in a wide range of roles, are featured in the new campaign – from designers and engineers to workers on the factory floor.

The new Volvo XC60 campaign goes live on January 21 at 21:10 pm CET and can from then be seen on TV and on YouTube.

Keywords:
Volvo XC60, 2016, Product News
Descriptions and facts in this press material relate to Volvo Cars' international car range. Described features might be optional. Vehicle specifications may vary from one country to another and may be altered without prior notification.
To view the full copyright information click here
Media Contacts
Related Images
Jan 21, 2016 ID: 173004 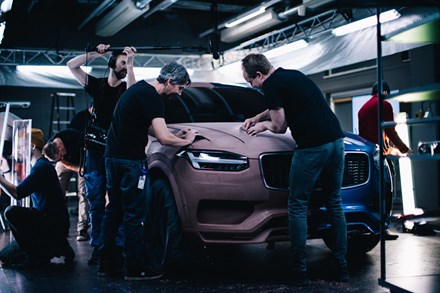