Volvo Safety Concept Car: The eyes have it!

Volvo Safety Concept Car: The eyes have it!

DETROIT - The Volvo Safety Concept Car, a vehicle designed to optimize every driver's vision and to explore other new concepts in active safety, made its world debut at the North American International Auto Show here today.

The vehicle, known by its initials - SCC, is built around the premise of placing the driver's eyes at the optimum position for outward visibility while removing many of the traditional obstructions to a clear view of the road.

Unlike other safety technology demonstrations, SCC concentrates on active safety and the role of the driver in preventing dangerous collisions. A collaborative project between Volvo Car Corporation and the Ford Motor Company, SCC combines traditional engineering with advanced electronics to always place the driver at the optimum position in the car for best visibility, regardless of the driver's size. Technical features include a video sensor that detects the driver's eyes, a computer that controls a motorized seat, and adjustable pedals and steering column.

A video camera located in the trim above the windshield scans the driver and locates the face, eyes and eye centres in a three-step process. The information is transmitted to a computer which determines how much to raise or lower the seat to place the driver's eyes at the optimum position for outward visibility. The computer then adjusts the brake and accelerator pedals, steering column and floor to match the driver's seat height and create a driving environment tailored to the individual behind the wheel.

The driver has the ability to fine tune the pedal and wheel positions for comfort, and controls are located in positions that are accessible to all drivers.

Two other key issues in outward visibility - the placement and design of the roof pillars - are also addressed in the Volvo SCC.

The 'A' and 'B' roof pillars of some cars can obstruct the outward view for many drivers. In the Volvo SCC, the 'A' or front roof pillars are made from a metal framework structure combined with plexiglass that allows the driver to see through them to the road ahead. The second or 'B' pillars curve inward and follow the shape of the seat frame to provide free visibility to the side.

"Drivers receive more than 90 per cent of the most critical information from outside the vehicle. If we can enhance the quality of this visual information, we can give drivers a better chance of avoiding collisions," says Hans Gustavsson, head of Research, Product Development and Purchasing at Volvo Car Corporation. "This is a top priority area in the Volvo SCC."

The SCC also displays two kinds of four-point seatbelts: a "CrissCross" or X-belt, and the "Centre Buckle Belt" or V4. The CrissCross Belt is a conventional three-point belt supplemented with an extended diagonal chest belt from the shoulder to the hip. The Centre Buckle design is similar to the type of belt used in rally and race cars. Both designs are integrated into the seat frame. The company will evaluate which of the two designs is most comfortable and most user-friendly at the Detroit show.

The Volvo Safety Concept Car was designed at the Volvo Monitoring and Concept Center in California.

Descriptions and facts in this press material relate to Volvo Cars's international car range. Described features might be optional. Vehicle specifications may vary from one country to another and may be altered without prior notification.
Related Images
Sep 18, 2003 ID: 218 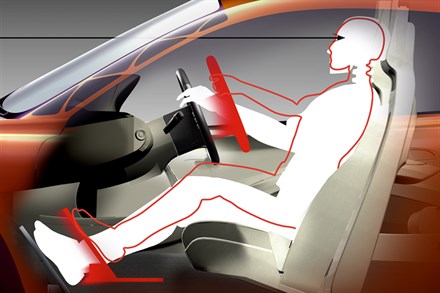 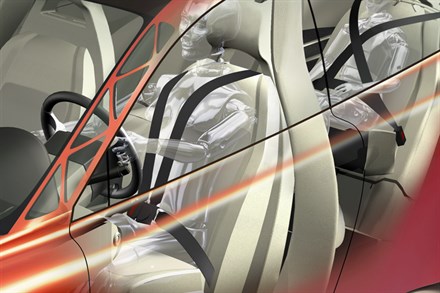