Despite its compact dimensions, the all-new Volvo S40 gets a transverse five-cylinder in-line engine – a unique feature in the compact class.
This has been made possible by new methods of shrinking the engine’s outer dimensions. The result is a compact car offering high performance and excellent driveability. The engine’s compact dimensions also contribute to the car’s excellent crash safety.
The chassis has been developed in parallel with the new engines so as to provide driving properties on a par with those of Volvo’s larger sedan models.

New engine generation of extremely compact dimensions
The new petrol engines are a further development of the low-friction engines that power the large Volvo models. The new generation is named RNC, with C indicating Compact. Most of the engine’s external components have been designed and packaged so that the engine installation takes exceptionally little space:

The exhaust manifold outlets are angled down towards the engine block.

The manifolds on the turbo engines are cast together with the turbo unit housing for added compactness.

The inlet manifold is compact-cast in fibreglass-reinforced plastic and is routed up over the engine. The fuel injectors are installed in an aluminium section for safety reasons.

The alternator, water pump and air conditioning compressor are of compact design and are very efficiently packaged.

The air conditioning compressor has been moved to be well protected in case of a collision.

More space between engine and passenger compartment
The result is an engine that is 200 mm slimmer and 25 mm shorter than that found in the large Volvo models. This compact format makes the engine lighter. Combined with Volvo’s architecture – transverse engine installation – it also contributes to high crash safety since there is added space for deformation in the engine compartment. In a collision, the engine can be shunted no less than 150 mm to the rear before the engine block comes into contact with the cross-member near the bulkhead.
There is no less than 70 mm of free space above the engine between the cylinder head and bonnet. This allows the bonnet to crumple gently, thus reducing the risk of head injuries if a pedestrian or cyclist should collide with the car.

Powerful engines for silky-smooth progress
The new five-cylinder in-line engines have a displacement of 2.4 and 2.5 litres respectively. The five cylinders and large displacement provide high torque from low engine revs – along with swift acceleration.
What is more, a five-cylinder engine with a long stroke has a more relaxed, more pleasant character owing to its low vibration level and smooth operation.
The engines in the all-new Volvo S40 share the same technology as the units that power the larger Volvo cars:

T5 turbo – later also with AWD
The Volvo S40 T5 is the sportiest model in the range. It has a 2.5 litre petrol engine mated to a light-pressure turbocharger. The turbo system is tuned to provide exceptional torque from low to high revs. The high and flat torque curve ensures excellent acceleration.
The manifold and turbo unit in the T5 engine have been cast together in high-alloy cast steel that is particularly heat resistant. It therefore needs less conventional cooling with petrol. As a result, the engine can be run on a leaner fuel mixture, promoting lower fuel consumption and exhaust emissions, especially when driving at high speeds and at a higher load.
The T5 engine offers a maximum of 220 hp and 320 Nm of torque.
The Volvo S40 T5 will later become available in combination with All Wheel Drive.
The AWD version will be launched in 2004. It will have the same type of electronically controlled hydraulic coupling as found on Volvo’s larger AWD models. “Four-wheel drive gives the car increased commercial prestige. An AWD model in the compact segment gives customers a wider choice and boosts our competitiveness,” explains Peter Ewerstrand, the project manager for the all-new Volvo S40.

Broad range of engines
At its launch, the all-new Volvo S40 will also be available with a choice of two five-cylinder normally aspirated engines, the 2.4i and 2.4 with 170 hp and 140 hp respectivly. Both engines have a displacement of 2.4 litres.
In addition, there is an entirely new four-cylinder diesel engine, the 2.0 D. It is turbocharged and has second-generation common rail technology featuring moving rails.
The injection system operates under immense pressure, ensuring extremely fine distribution of the fuel particles. This helps promote both good performance and low emission levels. During 2004 a particulate filter will be offered.
With the help of piezo-electrical injectors, the fuel can be portioned out in several small injectors during each combustion cycle, helping cut noise levels as a result. With these piezo-electrical injectors, the engine is prepared for forthcoming emissions requirements.
The diesel engine is a result of Ford Motor Company’s and Peugeot’s joint engine development programme.
The diesel engine has a displacement of 2.0 litres. In 2004, a smaller 1.6 litre diesel engine will also be launched.
The range of engines will be successively broadened.

The plans also include a wide range of Bi-Fuel engines, that is to say engines that can be run on both natural gas and petrol.
“When the model range is fully in place, we will have a remarkably complete span of engines to choose between,” says Peter Ewerstrand. “We will be able to meet just about any need and wish.”

Transmissions from the R models
The six-speed manual gearbox developed for the Volvo S60 R and V70 R now makes its entry in the Volvo S40 T5. The six forward ratios are spread out to combine swift acceleration with high top speed. The gearbox has triple synchromesh and a reassuringly distinct change pattern with a precise gate.
The normally aspirated engines are mated to a new generation of Volvo’s five-speed manual gearbox. It has been further developed with triple synchromesh for faster changes and distinct feel.

Adaptive automatic transmission
The automatic transmission for the Volvo S40 is the same as that used in the larger Volvo models. It is a five-speed unit with an adaptive gearchanging pattern; in other words, it adapts to the current driving style.
Much effort has been invested in matching driveshafts and universal joints to the high engine power outputs and in ensuring smooth, snatch-free power transmission under acceleration.

Six gears for the diesel too
The turbodiesel comes as standard with a six-speed manual gearbox (not the same as in the T5 model). This contributes to swift acceleration owing to excellent pulling power in every ratio.

Chassis with large-car properties
The all-new Volvo S40 has been developed in the same spirit as the Volvo S60 and Volvo S80. The experience gained from the advanced Volvo S60 R formed the basis for the new compact model.
“A modern Volvo should obey the driver’s slightest command – immediately and without fuss,” emphasises Peter Ewerstrand. “It should be as enjoyable to drive as it is safe. When it comes to the all-new Volvo S40, we had particularly high ambitions when the project got under way. And we’re more than pleased with the result.”
The five-cylinder powertrain laid the foundation for the large-car properties. The chassis technology is developed for very stringent demands. Independent suspension with a multilink system at the rear provides a superb combination of comfort and consistent response.The wider track and longer wheelbase, compared to the current Volvo S40 model, also contribute to the car’s stable behaviour on the road.
Front suspension geometry has been carefully calculated to provide quick and precise steering response, enhancing the sporty appeal.
The steering is electro-hydraulic, with light, distinct and controlled steering feedback.
“The new powertrain and the carefully matched chassis in combination with the body’s exceptional torsional rigidity, make for a particularly pleasant driving experience. This is a car you’ll truly look forward to driving whenever you get the chance,” promises Peter Ewerstrand.

Keywords:
S40
Descriptions and facts in this press material relate to Volvo Cars's international car range. Described features might be optional. Vehicle specifications may vary from one country to another and may be altered without prior notification.
To view the full copyright information click here
Aktuelle Fotos
Aug 18, 2003 ID: 7977 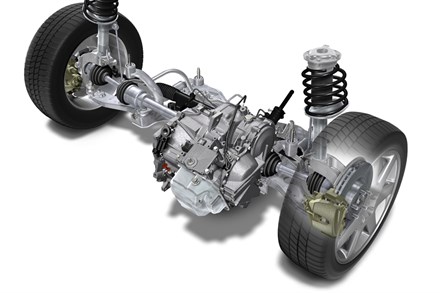 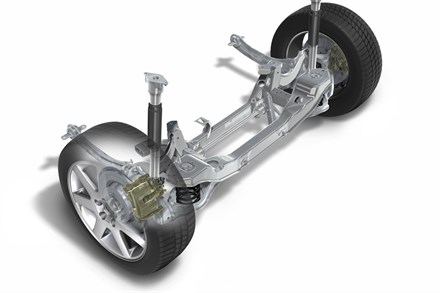