The Volvo C70 is the second-generation convertible from Volvo Cars. It was launched at the Frankfurt motor show in September 2005. The aim was to create two cars in one - without compromising on either. A three-piece retractable hardtop transforms the Volvo C70 from coupe to convertible at the touch of a button.

The Volvo C70 has been developed in close cooperation with Pininfarina of Italy.

The Volvo C70 is short and low but relatively wide. Its proportions and design were chosen to give the car a powerful profile. In order to ensure harmonious lines both with and without the roof, Volvo's designers decided to first draw the Volvo C70 as a coupe. Only after they were satisfied with the result did they make the necessary adjustments to create a convertible out of the finished design.

The car's haunches flow to the rear, giving a dynamic stance and reinforcing the sensation of a protective collar around the rear seat passengers. The upward sweep is balanced visually by the wave-shaped sill line.

The tail section has an abrupt cut-off. The tail lamps echo the design language of Volvo's sedan models, but with a slimmer profile to emphasise the C heritage.

A new rear spoiler is a discreet colour-coordinated accessory. It enhances the car's sporty appearance and helps improve the car's handling characteristics - especially at high speeds. The spoiler is made of lightweight plastic.

The interior is inspired by Scandinavian product design with the emphasis on uncluttered surfaces, honest materials and good function. The C70 also has features such as Volvo's ultra-slim, visually free-floating centre console, a specially developed upholstery material (Vulcaflex) and interior space that is remarkably generous for this type of car.

The Volvo C70 is designed for four adults. The rear has two pronounced, deeply contoured seats.

Legal requirements in the U.S. and Canada prohibit automatically closing windows by pressing a button. As of week 820, the global close function on the lock/unlock switch in the door panels will be deactivated.

Following colours will be available for the Volvo C70:

The tunnel console and the armrest have been given a design matching the dashboard's unique, floating centre console and with the same type of decor inserts. The aim has been to provide the highest possible feeling of quality while still increasing the flexibility and storage possibilities.

BLIS (Blind Spot Information System) is available in the Volvo C70, making it an optional extra in all Volvo models. As a result, the C70 model gets the same rear view mirrors as the Volvo S40 and V50.

In order to minimise the risk of children unintentionally opening the windows whilst driving, or opening the roof in the C70 model, these controls have been given a design with protective "barriers" situated between the buttons.

Volvo Cars adopts a holistic view of safety that encompasses both Preventive and Protective safety. Preventive safety is closely linked to the car's driving properties. The Volvo C70 is twice as torsionally rigid as the previous C70 model, thanks to an advanced and reinforced body structure. Combined with a sturdy chassis, torsional rigidity helps give the car consistent, predictable behaviour on the road.

Protective safety in the Volvo C70 is structured around a network consisting of exterior and interior safety systems that interact with one another to reduce the risk of occupant injury in a collision. The exterior systems have the task of distributing and absorbing incoming collision forces so that the passenger compartment remains as intact and undamaged as possible. The body is therefore built in the form of a metal cage made of different grades of steel, where all the components interact with one another to ensure controlled deformation.

Since the Volvo C70 does not have a fixed roof, the body has been reinforced in a variety of ways to allow the rest of the car's structure to absorb a greater proportion of the impact energy.  When a car rolls over, its windscreen frame is subjected to immense force.

In the Volvo C70, the windscreen pillars are made using hydroforming technology, whereby it is possible to make each pillar in one single piece but with varying thickness and high strength along its entire length. Even the ROPS bars - the metal hoops that come up behind the rear passengers in the event of a roll-over scenario - are particularly sturdily dimensioned and are activated exceptionally quickly.

The interior safety systems aim to keep the passengers securely in place and also to reduce the risk of serious injury. In order to provide the most effective protection possible, Volvo Cars has developed a number of in-house systems, such as WHIPS (Whiplash Protection System), SIPS (Side Impact Protection System) and IC (Inflatable Curtain). All are fitted as standard in the Volvo C70.

The inflatable curtain has been tailored for the convertible and is installed in the door. It deploys upwards. In order to further boost protection in the event of a roll-over scenario, the curtain deflates slowly. Every seat is equipped with a three-point seat belt, belt pre-tensioner and head restraint. The highest possible safety requires that all the car's occupants always use their seat belts.

The Volvo C70 can be equipped with the HomeLink system. The system makes it possible to operate up to three remote controlled home devices (e.g., garage door, home alarm system, etc.) via a module integrated into the sun visor. HomeLink contributes to easy and safe access to your home.

The engines in the Volvo C70 are five-cylinder, transversely installed in-line units. A five-cylinder engine gives low vibration and smooth operation. Together with large displacement, the five-cylinder configuration provides high torque across a broad rev band, and thus also swift acceleration and excellent driveability within a wide speed range.

The 2.0 l, 4-cylinder diesel engine (2.0D) is now available with a six-speed automatic gearbox. The 2.0D generates 136 hp and 320 Nm torque. The high-tech common rail system is used. The engine responds smoothly when accelerating and the complete driveline solution offers the driver good control and a high level of driving pleasure. A particulate filter is standard.

The Volvo C70 T5 is the top model and it features a turbocharged engine mated to either a five-speed automatic transmission or six-speed manual gearbox.

The engine programme for the Volvo C70 is as follows:

The chassis, with spring struts at the front and Multilink axle at the rear, is set up for stable, reassuring driving manners and alert steering response. The Multilink rear axle is an independent rear suspension system featuring a number of links and it is designed to offer a good combination of controlled wheel movements and high ride comfort. Some of these links have the task of providing a certain degree of anti-skid steering effect. A long wheelbase and wide track, together with a very torsionally rigid body, contribute to the predictable, controlled driving manners. What is more, chassis height has been substantially lowered front and rear to further benefit directional stability.

Volvo's advanced DSTC (Dynamic Stability and Traction Control) stability-enhancing system is fitted as standard. DSTC cuts in and helps stabilise the car if it registers any tendency to skid.

The Volvo C70 can be equipped with Bluetooth® - a technology that enables wireless communication. By connecting Volvo's Bluetooth device to the car's audio system and a Bluetooth compatible cellular telephone, easy and practical hands-free phoning is made possible.

The Volvo C70 is designed and equipped to impact as little as possible on the global environment and to offer a clean and healthy interior climate. Petrol engines with low internal friction, efficient combustion and advanced exhaust filtration technology result in low emissions.

Keywords:
C70
Descriptions and facts in this press material relate to Volvo Cars's international car range. Described features might be optional. Vehicle specifications may vary from one country to another and may be altered without prior notification.
To view the full copyright information click here
Aktuelle Fotos
Mai 27, 2008 ID: 15468 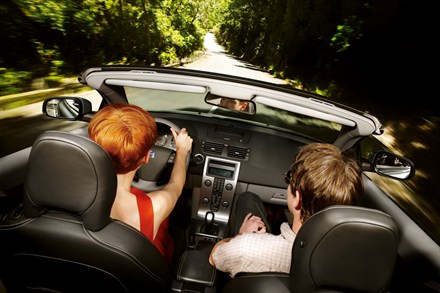 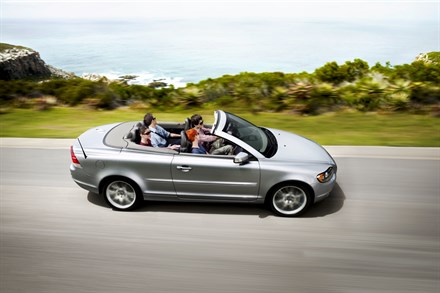