Turning 25: the Volvo 760 – the car that formed the foundation for the modern Volvo Car Corporation

It was in February 1982 – 25 years ago – that the new Volvo 760 GLE was unveiled. Volvo’s car of the ’80s received a rapturous welcome from both the press and the public. It was regarded as elegant and exciting with its chiselled features. Not a typical Volvo, yet unmistakably a Volvo. This was the car that saved the company back then, creating the foundation for what later led to the modern Volvo Car Corporation. However, the route ahead was both long and tricky.

Born in a strong head-wind
1975 was a tough year for the car industry. Fears over the future of the automobile were piling high. The world had just experienced its first oil crisis and at Volvo, the new 240 was beginning to suffer quality-related problems. On top of this was the already very difficult cost situation that the company was facing. It was quite simply too expensive to build Volvo cars in Torslanda and it wasn’t sufficiently profitable to export them.
The existing 200 Series would admittedly soon be accompanied by a new generation of smaller cars from Dutch Volvo Car BV, but for the 1980s it was necessary to also have a new large volume seller, designed and built to meet the increasingly tough demands on fuel efficiency, exhaust gas filtration and safety that were constantly being imposed. Another difficulty was that of determining exactly what kind of car customers in the 1980s actually wanted.

Thorough global analysis
It was in this operational climate that a group of people gathered at Volvo. Their brief was to formulate and then create the Volvo car for the 1980s – no easy task. Managerial responsibility had recently been placed in Håkan Frisinger’s hands and the position of Product Manager New Model and coordinator of the project was given to an ambitious young engineer who would later become the company’s engineering and product development manager, Hans Gustavsson.

“We started to plan the 760 at a time when the prerequisites changed virtually every day. And there wasn’t a whole lot of agreement either on what the car should be like,” he recalls. “For the first time ever at Volvo, we used a meticulously carried out global analysis. In-depth studies and flexibility in our approach would guide our work onto the right track. But we really did feel the pressure, knowing as we did that there was absolutely no room for any error.”

More car, less weight
A number of characteristics were to shape work on the new project, which was first named NV 80 and then NV 81 (NV being the abbreviation for New Vehicle, and the figures referring to their intended release years, 1980 and 1981). Reliability, fuel efficiency, long service life, service-friendliness, low noise level, design and performance – in that order – formed the parameters of the project. After a number of discussions the team agreed on the format: rear-wheel drive, shorter than the 240/260 but wider, the same track at the front but wider at the rear, 10 cm longer wheelbase and almost 100 kg lighter. The engine options would consist of the existing four-cylinder B19 and 21 units, the B27 V6 and an in-line six-cylinder diesel currently at the prototype stage which had been used in Volvo’s experimental taxi. The V8 B35 engine that had been developed a few years previously had already been cancelled from the range owing to lack of space.
Much of the rest of the technical content could, for cost reasons, also be carried over from the 200 Series with minor modifications. In addition to the engines, the transmissions, suspension and many other systems and sub-assemblies were carried over. The shape, however, had to be entirely new and fresh.

Product planning via stretcher
Work on the project, which by now had changed name to P31, naturally involved many changes of direction and restarts. One crucial situation was the result of the so-called Kleva exercise. The person who at the time served as product planning manager suffered an unusually severe case of lumbago and was restricted to his bed. At his summer cottage, Kleva, there was a barn that was quickly converted into the project’s operational headquarters. This was where everyone gathered and it was here that the car’s lines gradually emerged. Planning was quite simply conducted from a stretcher, where the patient lay and continued to direct operations. The technical specifications were determined more or less at the same time as the final shape was finalised. It was a task that was at least as demanding as filling the car with technology and packaging it all into a useful whole.

From army tank to shoe-box
Many design proposals were presented from the very outset, several from external sources, and some more successful than others. Most were sedans. However, Volvo’s design manager, Jan Wilsgaard, was more inclined towards a hatchback profile and at the same time, there was a leaning towards ruler-straight lines, mono-curves and crisp 90-degree angles, not least for pragmatic reasons of building ease.

When the time came to make a decision based on the various designs still in the running, where the main showdown was between the marketing people’s favourite and the design department’s chosen alternative, the crafty Wilsgaard played a hitherto concealed ace – his own version which unified the properties of the two in an unusual way: a model with an extended rear section as on an estate car, with straight sides and a short, abruptly terminated tail, known in design language as a cut-back. This alternative remained on the cards the whole time and finally a sedan version of this model came out the winner. Out of this daring cut-back model there emerged a sedan version with a virtually vertical rear window and a squared-off rear section. The straight sides created a good feeling of space, and the passenger compartment too was spacious and very comfortable. And, not least, the lines gave the car a character all its own.

If one wanted to be a bit unkind, one could say that Volvo’s car design had taken the step from army tank to shoe-box, but time would show that this was a particularly winning concept. At a time when look-alike “jelly-moulds” were flooding the market, Volvo’s boxy lines were becoming something of an icon.
“For the first time in Volvo’s history we used product clinics to test people’s reactions ahead of the imminent product release. The findings were not entirely positive, but in the US, which would be the car’s main market, the response was immensely positive and people felt that this was a model that was entirely to their taste, so we followed that line,” relates Hans Gustavsson.

P31 becomes “five to twelve”
Time went on, some new legislation affected the project still further, as did the engines. The in-line diesel six needed a lot of space and would now come from VW, but it was largely designed and built to Volvo’s specifications. Drawing-boards were still being used but the computer had made its entry, offering advanced calculation models, not least when it came to safety solutions.
The project entered its final phase and in early 1978 was renamed project 1155, that is to say five minutes to twelve according to the ever-bubbly Volvo sense of humour.

80 times round the world
In spring 1978, the first driveable prototype was ready. More and more cars were completed and the painful and never-ending field tests got under way. Over a distance of 3,200,000 kilometres covering three continents, the cars were punished in the bitterest cold and most blisteringly hot temperatures possible. Another highly useful and frequently used long-distance test facility, Taxi Göteborg, provided a lot of assistance with component trials in specially-built ‘mules’ – ordinary-looking Volvo 244 bodies on the outside but running on Volvo 760 components under the skin.
One interesting fact is that Volvo built an unusually large number of pre-series cars as part of the project, all of which were run as test cars within Volvo before being scrapped. No fewer than six of these cars were driven over the edge of the drained Eriksberg Shipyard dry-dock for VCC’s famous safety film before the footage satisfied the producer’s critical eye.

General rehearsal
In 1979 the car division was restructured into a separate company, the Volvo Car Corporation, with Håkan Frisinger serving as President and CEO. 1980 saw the unveiling of a teaser that indicated what would be on the way a year or so later: the Volvo Concept Car was an updated version of the cut-back model that had actually served as the design model for the original 760. It was shorter at the rear than the 760 turned out to be but was otherwise identical in most other respects. The VCC is now on display at the Volvo Museum. Its initials, funnily enough, coincided with the initials of the Volvo Car Corporation. At the same time, the forthcoming 760 model’s new rear axle was also presented, this being a new construction that ensured constant track, and the wraps also came off a powerful turbodiesel engine that showed the enormous potential there was in compressor-equipped engines.

Driving pleasure and sound common sense
The 760 was originally scheduled to be unveiled to the public at the Frankfurt motor show in autumn 1981 but this was postponed because quality was not quite up to Volvo standard. When the wraps were finally pulled off the car in February 1982, what emerged was an elegant Volvo boasting daring, totally new lines, comfortable yet with plenty of driving pleasure with a choice of three engines: a four-cylinder turbocharged petrol engine, a V6 petrol engine that had now grown to 2.8 litres, and the in-line six-cylinder D24 diesel engine built by Volkswagen but largely to Volvo’s unique specifications. With a turbocharger, it made the 760 the fastest-accelerating diesel car in the world at the time.

The car’s price in Sweden, 99,800 kronor, came in just under the psychological 100,000 kronor barrier and for that money customers got a truly fully-equipped car with features such as a six-cylinder engine, automatic transmission, sunroof and power steering. Sales successes both at home and on the export markets were not long in coming. In true Volvo fashion, the company started off with the top-of-the-range model, gradually adding volume-selling models in both four-door sedan and five-door estate car guise.

Hans Gustavsson sums up:
“The Volvo 760 was a pivotal point for Volvo Cars in terms of product and economy, and both it and its derivatives came to form the basis for the company’s survival. Without the 760 there would have been no 850, without that no S80, and so on. The 760 project cost 3.5 billion kronor at that time. Of course, the aim was that the 760 and its forthcoming derivatives should last throughout the 1980s.

Keywords:
Historical
Descriptions and facts in this press material relate to Volvo Car UK's car range. Described features might be optional. All information is correct at time of going to press and may be altered without prior notification.
Related Images
Feb 05, 2003 ID: 6204 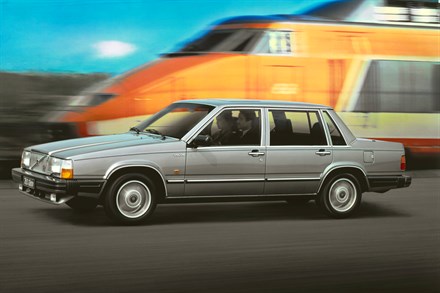 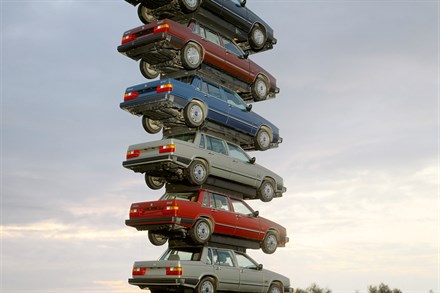