The Volvo V40 was praised for its exceptional NCAP Safety Rating, receiving the highest ever score by the institute, and also for featuring leading innovative safety technology as standard across the range.

Nick Connor, managing director of Volvo Car UK, accepting the award on the night, commented "It is a great pleasure to accept this award for such an important model for us in the UK.  The all-new Volvo V40 has received many awards since its introduction just under a year ago and this prestigious addition further highlights our leadership in safety technology."

Steve Fowler, editor-in-chief of Auto Express said "Volvo is synonymous with safety and the new Volvo V40 underlines that by winning the Auto Express Safety Award. It's the highest scoring car ever tested by Euro NCAP and comes with a host of innovative features that could be both cost and life-saving. Every car should be as safe as a Volvo V40."

The Volvo V40 is available in three derivatives, from the standard vehicle, to the sporty R-Design and the rugged Cross Country.  All are fitted as standard with the world's first Pedestrian Airbag and Volvo's pioneering low-speed collision avoidance system, City Safety.

As part of Volvo's continuing effort towards its Vision 2020 goal that no-one should be killed or seriously injured in a new Volvo, both passive and active systems are employed.  Owners are able to specify technology such as Pedestrian and Cyclist Detection, Collision Warning with Full Auto Brake, Distance Alert Control, Lane Keeping Aid, Blind Spot Information System and Cross Traffic Alert.  All of these systems compliment the standard features fitted such as front and side airbags, side impact protection system and whiplash protection system.

Even people on the outside of the vehicle are protected with the world first Pedestrian Airbag that deploys over the lower part of the windscreen and A-pillars and lifts the bonnet slightly to help absorb the impact.

Keywords:
V40, V40 Cross Country, Awards, 2013, 2014
Descriptions and facts in this press material relate to Volvo Car UK's car range. Described features might be optional. All information is correct at time of going to press and may be altered without prior notification.
Related Images
Nov 09, 2012 ID: 46785 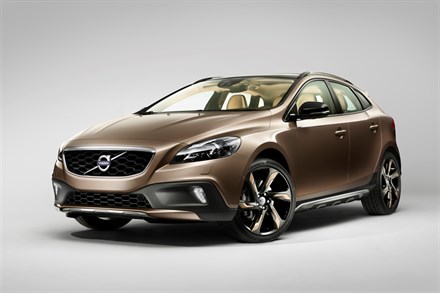