Volvo Car UK has backed the House of Commons Environmental Audit Select Committee's (EAC) call today (14.11.11) for a Government public awareness campaign to educate people about the positive action they could take to help improve air quality, and ultimately their health.

Back in 2010, Volvo Car UK launched its Emissions Equality campaign, dedicated to educating motorists about the wider picture of car emissions, rather than just CO2 in isolation. At that time, Volvo launched a Think Tank and a Smart Phone App as part of the awareness campaign because it's been proven that automotive emissions other than CO2 (NOx, Hydrocarbons and Particulates) are key contributors to poor air quality, particularly in urban areas.

Volvo believes that as part of the Government public awareness campaign, the Vehicle Certification Agency (VCA) should automatically make detailed and accurate emissions data more widely available on every car sold in the UK. This could then be used by customers during the purchase process to make a more informed choice of car.

The EAC has seen evidence that poor air quality is causing health problems to get worse since its first report in early 2010, with it contributing to the early deaths of an estimated 200,000 people, a rise from last year's prediction of 50,000 people. Poor air quality is potentially also contributing to 15-30% of asthma cases in children according to the EAC's report announced today.

"It sounds obvious but unless you can see something like poor air quality, you are less likely to take notice and ultimately take action against avoiding it. This is where a public awareness campaign comes in," said Duncan Forrester, Head of Public Affairs of Volvo Car UK.

"Taking measures to reduce a person's exposure to poor air quality is one approach, while making it easier for all motorists to make a more holistic decision on the total emissions generated by their next new or used car should ultimately help reduce automotive related emissions ," he added.

In particular Volvo believes in initiatives like Environment Protection UK's Healthy Air Campaign which is supported by a coalition of transport, health and environment Non Governmental Organisations (NGOs).

Volvo already offers three cars - the C30, S40 and V50 with emissions at less than 100g/km, while its new V60 Plug-in Hybrid, which is due for launch in 2012, will generate just 49g/km of emissions, the lowest CO2 output of any internal combustion-engined production car currently for sale in the UK.

This is all part of Volvo's ‘Drive Towards Zero' vision which aims to offer a car range entirely free from harmful exhaust emissions and environment impacting carbon dioxide. In 2015 it aims to reduce its average CO2 emissions across the range to 130g/km, and to 95g/km by 2020.

Keywords:
Environment
Descriptions and facts in this press material relate to Volvo Car UK's car range. Described features might be optional. All information is correct at time of going to press and may be altered without prior notification.
Related Images
Jul 14, 2010 ID: 33659 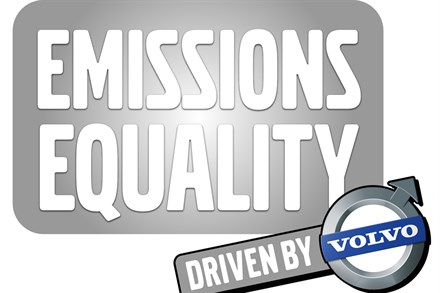