“We see a big potential for this new brand entering the European market and we are happy to give Lynk & Co the support of Volvo’s technological and industrial expertise,” said Håkan Samuelsson, President and CEO of Volvo Cars.

“Our Ghent plant is one of the most efficient car manufacturing plants in Europe, with a highly skilled workforce,” said Javier Varela, Senior Vice President for manufacturing and logistics at Volvo Cars. “Lynk & Co’s decision to pick Ghent for their European production demonstrates the high levels of quality control that underpin Volvo’s global manufacturing strategy.”

The Ghent plant currently builds the XC40, Volvo’s first entry in the fast-growing small SUV segment, which was named 2018 European Car of the Year last month at the Geneva Motor Show. Ghent also builds the V40 and V40 Cross Country hatchbacks as well as the S60 saloon, and will soon start producing the all-new V60 five-door, mid-size estate revealed in February this year.

Keywords:
Corporate News, 2018, XC40, Product News
Descriptions and facts in this press material relate to Volvo Car UK's car range. Described features might be optional. All information is correct at time of going to press and may be altered without prior notification.
To view the full copyright information click here
Media Contacts
Related Images
Mar 26, 2018 ID: 226649 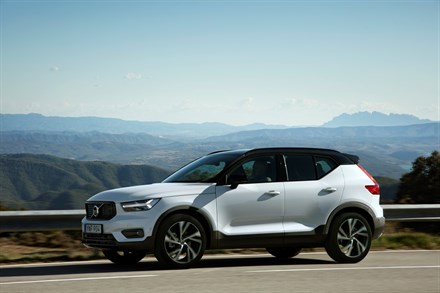