• Volvo Car UK to provide 20 cars to support the scheme

Young people between the ages of 14 and 17 are set to receive driver training as part of the national curriculum for the first time, thanks to a pioneering new initiative in the Scottish Borders starting today.

In partnership with a wider consortium, John Cleland, Volvo dealer principal of Cleland of the Borders, Galashiels, has invested in the new scheme, which will see more than 700 local 14 to 17-year-old secondary school pupils take part over the course of the year. Its introduction comes after it was found that under-17s with controlled driving experience are five times safer than their peers*.

The programme will be run by a consortium involving Police Scotland, IAM RoadSmart, Scottish Fire and Rescue, Scottish Ambulance Service, and Scottish Borders Council. It will incorporate 14 day-long sessions, starting on 26th April and running until 19th October 2017, at the former RAF airfield, Charterhall, in Berwickshire. Volvo Car UK will provide 20 vehicles for use at each event.

"A road accident report conducted in the Scottish Borders last year found that 25% of the accidents analysed involved drivers under the age of 25," comments John Cleland, Cleland of the Borders' Volvo dealer principal and former British Touring Car Champion.

"In our region, 47% of the population live in a rural community where a high proportion of roads are classed as derestricted, presenting many challenges and hazards for any driver, particularly those who are new to driving. We have set up this new initiative to educate young people early, because it's been found that those under the age of 17 with controlled driving experience are five times safer than their peers," adds Cleland.

Supported by the Scottish emergency services and IAM's advanced driving instructors, the pioneering initiative will assess pupils' awareness and attitudes towards driving through classroom tuition prior to undertaking activity behind the wheel. Tutors will educate students on the fundamentals of driving, from the rules of the road and hazard perception through to manoeuvring a vehicle. Under the guidance of professionally trained advanced driving instructors, the pupils will get the opportunity to drive Volvo's multi-award-winning V40 hatchback, one of the safest cars ever tested by Euro NCAP, and the UK's safest used car according to Co-op Insurance, which will offer real-life experience of a technologically advanced, modern vehicle.

"Getting young driver education into schools as part of the curriculum has been a long-term goal for everyone involved in the partnership because it offers long-term benefits for both the driver and the Borders community. To see our efforts come to fruition is an amazing step forward in road safety for the Borders region," comments Chief Inspector Andy McLean, Police Scotland. "The new initiative gives young drivers the experience they need to survive the high-risk early months of solo driving, so anything we can do to provide them with these skills to make roads safer has to be welcomed."

The scheme for 14 to 17-year-olds follows on from a successful and on-going programme launched in 2014, which has already seen hundreds of drivers from the Borders aged 17 to 25 provided with advanced driver training. The Scottish Borders Council committed £48,000 to put the drivers through the IAM's Skill for Life programme after it was found that young people accounted for 20-25% of the 400 people injured on Borders roads from 2008-2012**.

Cleland of the Borders also provides a free vehicle health check for those who take part, to ensure their cars are in the safest possible condition, as well as reimbursing participants the £149 course fee on completion.

"Both programmes offer an opportunity to cut road deaths and make younger drivers safer and more confident on the roads. Scottish Government figures show that £35.7m is the average annual cost of road accidents in the region, so the scheme will also look to cut government costs," said Jeanette McDiarmid, Deputy Chief Executive, Scottish Borders Council.

Sarah Sillars, IAM RoadSmart Chief Executive Officer, added: "IAM RoadSmart has long campaigned for road safety to be a part of the national curriculum, and through this pioneering scheme in the Scottish Borders in partnership with Volvo's Cleland of the Borders and the Scottish emergency services, it's starting to happen."

* A study in 2012 demonstrated that graduates of the IAM Under 17 Car Club are five times safer than their peers, with a first-year accident rate of one in 20 compared with one in five nationally. They are also more likely to pass their driving test first time.

In a survey of more than 100 advanced drivers who had already completed the advanced 17-25 driving course:

• 99% said the course improved their driving 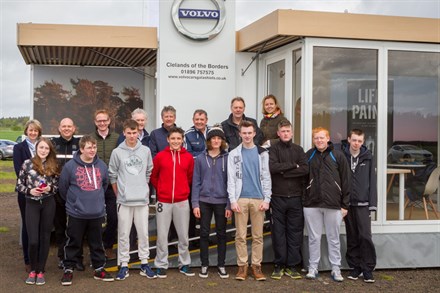