• Praised for its style, quality, efficiency, space – and, of course, safety

• Available with diesel, petrol and plug-in hybrid powertrains, priced from £46,850

The Volvo XC90 has been named 'Best Large SUV' at the Auto Express New Car Awards – for the second year in a row.

The XC90 beat new competition from Audi, Lexus and Mercedes-Benz to claim the award, which was presented at a prestigious ceremony held at the Grand Connaught Rooms, London, on Tuesday 5th July 2016.

Commenting on the award, Auto Express's editor-in-chief, Steve Fowler, said: "Last year's Auto Express Car of the Year wins its category once again, in spite of strong competition. The Volvo XC90 is a fantastic SUV with its combination of style, quality, space and efficiency. It has all the safety kit you'd expect from a Volvo, but also a level of kit that you might not – it's a seriously advanced car, which keeps it on top of the class."

The XC90 set a new standard for Volvo cars. Not only was it the first car to use Volvo's all-new SPA (Scalable Product Architecture) platform, it heralded a new design direction for the company and set new benchmarks in the class for connectivity, safety and efficiency.

The SPA platform is designed to offer the highest levels of technological sophistication and safety, while being developed from the outset for electrification means that the petrol-electric T8 Twin Engine version retains all the seven-seat versatility and practicality of the petrol and diesel versions, despite also housing the hybrid powertrain's batteries and electric motor.

Every XC90 is luxuriously equipped as standard, including a nine-inch touch screen control system that provides access to the internet and a range of cloud-based apps, two-zone climate control with Volvo's ground-breaking CleanZone air-filtration system, LED headlights and a tailgate that you can open simply by waving your foot beneath the bumper.

The amount of safety equipment is equally impressive. As standard, every XC90 comes with Pilot Assist – Volvo's semi-autonomous drive technology, which takes care of the steering, accelerator and brake inputs to keep the car in its lane up to 80 mph – and fully automatic emergency braking with pedestrian, cyclist and large-animal detection.

Jon Wakefield, Acting Managing Director of Volvo Car UK, said: "To be awarded the Best Large SUV title at the Auto Express New Car Awards is a huge achievement – but to win it for the second year running is a testament to the XC90's continuing excellence. The XC90 is a hugely important car for Volvo, both in terms of what it shows we are capable of and where the company is headed, and for the car to win this prestigious award again demonstrates just how exceptional the first of the new generation of Volvo models really is."

For more information on the multi-award-winning Volvo XC90, please go to www.volvocars.com/uk/

Keywords:
XC90, 2016, Product News
Descriptions and facts in this press material relate to Volvo Car UK's car range. Described features might be optional. All information is correct at time of going to press and may be altered without prior notification.
To view the full copyright information click here
Media Contacts
Related Images
Mar 01, 2016 ID: 193919 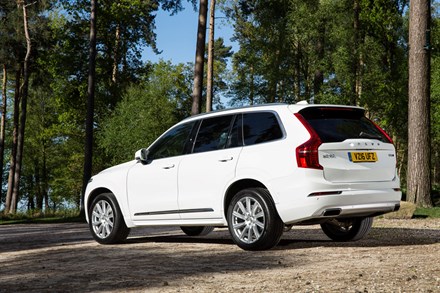