The Volvo XC90 T8 Twin Engine has been voted the Car of the Year in the Stuff Gadget Awards 2015.

Stuff is the UK’s best-selling gadget magazine, and its awards celebrate the pick of the year’s technology. The XC90 T8 defeated such illustrious competition as the Ariel Nomad, Audi RS3, Range Rover Sport SVR, Tesla Model S P85D, Toyota Mirai and the Volkswagen Golf R to claim the title.

Commenting on the award-winning car, the Stuff.tv website deputy editor Tom Parsons said: “Safe, stylish and a dream to drive, the new XC90 is a tech-toting titan that’s both swift and economical, with smarts to make a genius jealous and genuinely useful on-the-road driver aids.”

The XC90 T8 is at the forefront of Volvo’s technological revolution, featuring a powerful petrol engine with an electric motor to provide dynamic performance with outstanding efficiency and environmental credentials.

Of course, it is packed with technology, too, including a nine-inch touchscreen information and entertainment system. This is no ordinary touchscreen set-up, though, because it includes pinch and zoom and swipe functionality, so truly offers the usability and convenience of a tablet-style interface.

Every XC90 also comes with Sensus Connect, which includes internet connectivity and access to a range of web apps such as Rdio, Stitcher, TuneIn, LocalSearch and Yelp.*

Another ground-breaking feature is the Volvo On Call app. Standard on every XC90, this allows you to remotely lock and unlock the car, check whether the doors and windows are closed, and access the car’s trip computer information. It also provides the location of your XC90 on a map, and allows you to sound the car’s horn and flash its headlights – perfect if you’ve forgotten where you left it in a busy car park. It even uses the car’s GPS to track your XC90 if it is stolen and will automatically alert the emergency services if you’re involved in an accident.

Being a Volvo, the XC90 is designed to keep you as safe as possible. It includes two world-first safety technologies: automatic emergency braking at an intersection, and run-off road protection, which is designed to reduce the likelihood of spinal injuries if the car leaves the road. These are on top of the XC90’s comprehensive suite of safety aids, including pedestrian and cyclist detection, and front collision warning with fully automatic emergency braking.

Then there’s the technology that simply makes living with the car that bit easier. The tailgate is electronically operated, but you don’t need to get the key out to use it – all you have to do is have the key with you and wave your foot beneath the rear bumper to open or close the tailgate. You don’t even have to use the key to unlock the doors or start the engine, while many of the car’s other entertainment and convenience functions can be controlled via the sophisticated voice control system.

Nick Connor, Managing Director of Volvo Car UK, said: “To have the XC90 T8 Twin Engine’s technology honoured by such an influential gadgetry title is a tremendous result. With its high-tech petrol-electric powertrain and ground-breaking connectivity features, the XC90 T8 is the most technologically advanced car Volvo has ever built. It is also full of electronic equipment designed to make your life easier, so while cars are getting more sophisticated, the XC90 T8 is proof that they don’t have to be more complicated.”

For the full story on the Stuff awards, see the Stuff Gadget Awards 2015 special issue, on sale now, or go to www.stuff.tv/awards/2015

Keywords:
XC90, 2016, Product News
Descriptions and facts in this press material relate to Volvo Car UK's car range. Described features might be optional. All information is correct at time of going to press and may be altered without prior notification.
To view the full copyright information click here
Media Contacts
Related Images
Aug 26, 2014 ID: 149806 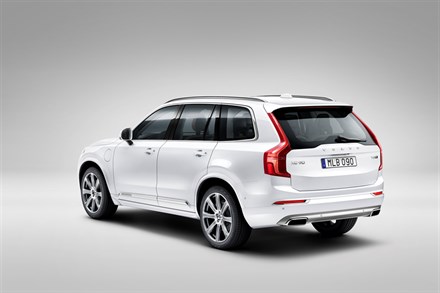