Concept cars have always attracted attention at the world's motor shows. In the case of many manufacturers they tend to be pure design studies - futuristic but empty shells which look good on camera. The purpose of Volvo's concept cars, however, has always been to identify and try out new solutions for designs and technology that really work.

Volvo Cars is currently working on these different
types of concept cars:

Volvo Car Corporation is rewriting the rulebook on how the cars in the future will look with the 3CC prototype being unveiled to the public for the first time at the Michelin Challenge Bibendum in Shanghai, October 12-14, 2004.
From the outside, the Volvo 3CC has an iconic funky-cool tapered shape designed to make a dynamic statement that nonetheless is unmistakably Volvo. Under the hood is an electric powertrain that quietly propels the Volvo 3CC to a governed top speed of over 135 km/h (85 mph) and delivers zero to 100 km/h (62 mph) acceleration in approximately ten seconds – with zero emissions!

Just 3899 mm (153.5 in.) long, 1624 mm (64 in.) wide and 1321 mm (52 in.) high, the Volvo 3CC has dimensions similar to a classic 2-seater sports car – but that is where similarities end. For the sporty vehicle packs a surprise: a unique two-plus-one configuration, providing seating for two adults in the front and a unique rear seat solution for an additional adult or two children.

This 3-seat configuration provides a unique experience with regards to the occupants' communication, unprecedented rear occupant's comfort and all-around visibility for all passengers.

“With the Volvo 3CC, Volvo Cars is pioneering a new way of looking at mobility so future generations can enjoy the same freedoms the car has given my generation. We believe it is necessary to show new ways to reduce pollution and congestion,” says Lars Erik Lundin, Vice President & General Manager of the Volvo Monitoring and Concept Center VMCC.

The Volvo 3CC is the brainchild of the designers, engineers and business people at the Volvo Monitoring and Concept Center think-tank in California. Their task was to create a `future-proof concept´ that would enhance sustainable mobility. A car not only fuel-efficient, versatile, comfortable, and safe, but also exciting to drive and look at.

“We want to connect in a positive way with consumers so that they say ‘I want to be seen in this car’,” Lars Erik Lundin explains. “We want to add emotional value to people’s lives by offering an environmentally compatible car that appeals to all the senses, and which people want to drive.”

Despite its compactness, the Volvo 3CC has been designed to feel spacious through organic lines, and light colors. Inside, the fixed eye plane ergonomics and low profile A-pillar create a sense of openness aided by three transparent panels in the roof. As the doors open by swinging upwards, a floating dash panel slides forward to ease ingress and egress. A unique sliding seat system also assists ingress and egress to the rear seat. The pedals also adjust for individual requirements.

But Volvo Car Corporation's aim was not just to make the 3CC look good – they also wanted to deliver on overall sustainable mobility goals by providing excellent efficiency. Volvo has achieved this objective through good aerodynamics on a compact footprint, lightweight body materials, and an electric powertrain.

Volvo Cars opted to give the Volvo 3CC a high strength steel space frame and composite sandwich floor panels for safety and lightweight. The outer body is a bonded one piece carbon fibre shell. The resulting chassis rigidity and its innovative suspension also give the car great handling characteristics.

“The double floor used to house the electric energy storage makes the concept future-proof in that the layout can be adapted for the most appropriate powertrain in the future, whether it be petrol, diesel, biogas, or hybrid electric,” explains Ichiro Sugioka, Science Officer at VMCC in California. "In Shanghai, we are demonstrating the electric powertrain, one of the most challenging to package into a vehicle, to highlight its potential where there is abundance of renewable energy that can be converted to electricity."

Meticulous wind tunnel tests resulted in an enhanced aerodynamic efficiency that is 30% better than the new S40 sedan.

With a potential driving range of over 300 km (180 miles) under certain driving conditions, the torque-to-weight ratio is roughly comparable to the powerful T5 model, but available over 0 - 3500 rpm. In typical driving conditions, about 20 percent of the energy can be recovered by regenerative braking.

This performance is achieved using a drivetrain specifically designed for the Volvo 3CC, although it too is a prototype. The electric power comes from lithium-ion cells identical to those used in modern laptop computers that are packaged in the thin sandwich floor.

The interior of the Volvo 3CC offers dynamic ergonomic positioning for both driver and front passenger. Unique solutions include replacing instrument panel toggles with proximity sensors that are activated by a finger as it gets to within 5 mm to adjust lights, climate, and audio system.

“Rather than refining existing cars and technologies for new markets, Volvo has listened, questioned and speculated about the future and developed this all new concept,” says Lex Kerssemakers, Senior Vice President of Brand, Product & Business Strategy. “We think the Volvo 3CC opens a door into that future and we will develop the concept further.”

A versatile heavyweight packed with the electronics of the future. The Versatility Concept Car (VCC) was unweiled in Geneva on 4 March 2003. More luxurious, smarter and constantly online. Even kinder to the environment, with its solar-powered ambient air cleaning system.
A more powerful engine using new turbo technology - but at the same time more fuel efficient.
The six-cylinder engine has a displacement of 2.6 litres and develops 250 bhp, but - thanks partly to new turbo technology - consumes only 6.5 litres of fuel for every 100 kilometres.

Light in abundance - The roof panel has an X-frame and features ambient lighting. The semi-transparent solar panel on the roof provides power for the Volvo Ambient Air Cleaner system, an innovation which removes pollutants from air outside the car even when the engine is switched off.

Clear view - The VCC has no B pillars. The rear doors are hinged at the back - so opening both front and back doors gives an unparalleld view of the interior. The seat belts are fully integrated into the seat frames. Because of safety considerations, this solution is not intended for production vehicles.

Echoes of the past - The tailgate design was inspired by the 1971 Volvo 1800 ES. The car's distinctive broad shoulders - the Volvo catwalk - are even more pronounced than in the Volvo V70 or S80.

Infotainment - The car is also packed with the electronics of the future. All of the digitally-based forms of entertainment likely to be commonplace in our homes ten years from now can be accessed and enjoyed aboard the VCC by wireless transfer.

The instrument panel is a development of those in the existing product range - but with fewer design elements. Its finish and colours have been carefully chosen to harmonise with the rest of the car interior.
"Our aim was to create an atmosphere of total tranquillity for our customers," says José Diaz de la Vega, Creative Director, Strategic Design.

At Volvo Car Corporation, an all-women team is developing a concept car that goes under the internal working name ofYour Concept Car. The finished product will be revealed next year.

The idea of creating a car where women decide about engineering and design was initiated by a number of female employees at Volvo Cars. In 2002, the concept and pre-sketches were presented to President and CEO Hans-Olov Olsson and the executive management team. They liked it.

Just before the end of the year, the project was given the go-ahead and work on the concept car could begin.

A concept car in which the emphasis is on design and safety, already the winner of a prestigious award from Autocar magazine in the UK (2002). The SCC was launched at Detroit Motor Show in 2001.

This car has moved beyond passive safety design features into the area of active safety. Thus, the ability of the driver to remain fully aware of everything happening around the car was a major consideration in developing the Volvo SCC.

When the driver gets into the SCC, a sensor detects where his or her eyes are and automatically adjusts the seat for the optimum line of vision. Then the floor, pedals, steering wheel, gear lever and instrument panel all move as required, bringing them into the right positions for that particular driver. Other examples of ways in which the SCC helps the driver both to see better and to notice more include see-through A-pillars and cameras which eliminate blind spots. The headlights are angled into bends as the steering wheel turns. An infrared camera reveals hazards ahead, such as animals on the road, while they are far beyond the range of the light beam and a radar system warns of cars in places where the driver may not notice them.

The Volvo SCC also features two new types of seat belts, e g the X4 Criss Cross Belt. It's a four-point safety belt, which is just as comfortable to use as a regular three-point belt.

Keywords:
3CC, YCC, VCC, SCC, Concepts
Descriptions and facts in this press material relate to Volvo Car UK's car range. Described features might be optional. All information is correct at time of going to press and may be altered without prior notification.
To view the full copyright information click here
Related Images
Sep 23, 2004 ID: 8691 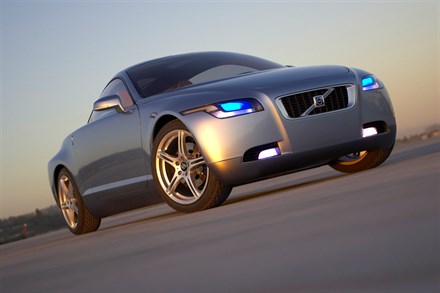 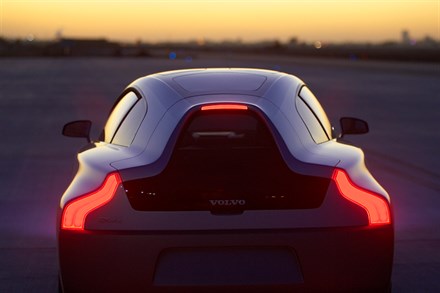