Reducing fuel consumption and emissions are two of the top-priority environmental objectives at Volvo Cars.

One of the most promising technologies in this sphere is the Integrated Starter Generator (ISG) developed by Volvo Cars and demonstrated at the 2001 Frankfurt Motor Show.

In urban driving with its many stops and starts, decelerations and accelerations, ISG can cut fuel consumption by as much as 20 per cent, as well as significantly reducing emissions.

The ISG unit displayed here is installed between the engine and gearbox, linked directly to the crankshaft. ISG replaces both the starter motor and the alternator. In addition, ISG supplies power in certain operating conditions, thereby saving fuel, as not all the power is supplied by the engine alone.

The ISG system employs 42-volt technology and has a separate battery that is placed in the spare wheel bay in the luggage compartment.

Can be integrated in any Volvo

There is no need to develop a new car model or significantly modify an existing car – ISG can be integrated with most of Volvo’s current car models. It is a very cost-effective system compared with other solutions designed to benefit the environment, such as full hybrid powertrains.

A Volvo with ISG looks and behaves pretty much like a standard Volvo. The most noticeable differences are that the engine stops as soon as the car comes to a standstill and the longer intervals between visits to the petrol station…

The engine switches off when the car comes to a standstill

In a car with ISG, the engine switches off completely when the car comes to a standstill, instead of continuing to use fuel at idling speed – for instance, when waiting at a traffic light.

When the traffic light turns green and the driver releases the brake pedal to get the car moving, the ISG car starts up instantly and almost noiselessly. ISG supplies the engine with additional power at the moment the car takes off and also during acceleration – when the car would otherwise require an extra portion of fuel to be injected into the engine.

For the user who drives a great deal in urban traffic, this is clear evidence of the environmental benefits of the ISG car. The engine is simply not used when the car is not moving.

More alert than a conventional car

ISG remains active throughout the driving process – for example, during overtaking or at other times when its power is needed or favourable.

In certain situations, the ISG-equipped car feels even more alert than a corresponding car with conventional power. For instance, you can drive at low revs in a high gear with maintained response and driveability.

The basic principle behind ISG is that the combustion engine should work as little and as effectively as possible in order to cut fuel consumption and reduce exhaust emissions.

When you remove your foot from the accelerator pedal to slow down, the forward movement of the car powers the ISG unit, which in turn recharges the 42-volt battery with free energy.

ISG is far more efficient than a conventional alternator and this also contributes to the low fuel consumption.

It also means that systems such as the power steering and air conditioning, which in present-day cars are powered by the combustion engine, can instead be powered by electricity.

The air-conditioning system thus continues to remain active even when the engine switches off. This is a benefit that many of Volvo’s competitors cannot offer in their own ISG projects.

In addition to powering the ISG system, 42-volt technology provides other benefits. The higher voltage means that the new technologies that are being used on an increasing scale in cars, in the form of advanced safety and information systems, for example, have a more secure current supply.

In addition, it will be possible to integrate far more electrically-powered comfort-enhancing features. How about a cup-holder that cools your soft drink – or keeps your coffee hot? All this is possible with 42-volt technology. Development by Volvo and the FMC is already under way.

ISG in a nutshell

The engine shuts off instead of idling – which means zero fuel consumption and emissions when the car is standing still.

Quick start with low emissions, combined with a safe take-off.

The start is also quieter.

Offers comfort and driveability even when driving at low revs in high gear, which saves fuel.

The ISG unit adds extra power when it is needed – without additional fuel. This cuts consumption as well as emissions.

The ISG generates electric power more effectively than an ordinary alternator. During slow-down, "free" energy is recovered and stored in the 42-volt battery.

Keywords:
Environment
Descriptions and facts in this press material relate to Volvo Cars' international car range. Described features might be optional. Vehicle specifications may vary from one country to another and may be altered without prior notification.
Media Contacts
Related Images
Sep 10, 2001 ID: 7170 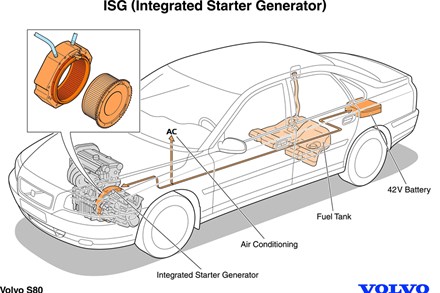 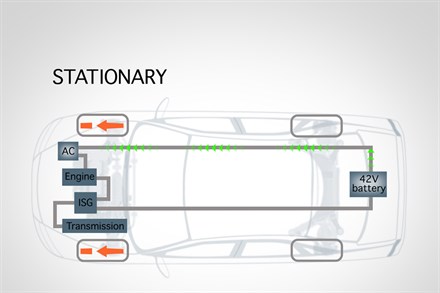