It has been rolling for 90 years now, and keeps on rolling; the name VOLVO which first appeared in June 90 years ago on a ball bearing. The name was officially registered on June 22, 1915 after a slight administrative mishap, and was henceforth stamped on the side of the outer race on SKF's new ball and roller bearings designed for automotive use.

Already the year before, Svenska Kullagerfabriken – SKF – had realised the enormous market potential the automotive business offered for a manufacturer of bearings, and accordingly started up a subsidiary to supply this industry. SKF was already a world-leading developer and manufacturer of industrial bearings thanks to the unique invention of its founder Sven Wingquist, the spherical bearing.

Volvo – simple, smart and easy to pronounce
Some smart member of the company's management with an ear for words and languages came up with the name VOLVO (with capital letters) and on February 20, 1915, the application documents were sent from SKF – through the AB Delmar & Co Patent Office in Stockholm – to the Royal Swedish Patent & Registration Office.

"Volvere" is the infinitive form of  the verb "roll" in Latin. Compare it, for instance, with the word for a handgun with a rotating drum, revolver. In its first person singular form, the verb "volvere" becomes "volvo", i.e. "I roll".

The name was simple, ingenious and with a very strong symbolic connection to the company's entire operation. Furthermore, it contained no R or S. Easy to pronounce in most places around the world and with a minimal risk for spelling errors. SKF was a large export company already in those days and fully realised the value of a good brand name.
The American industrialist and camera manufacturer Eastman, who had invented roll film a couple of years earlier, reasoned in the same way and chose a simple brand name withour either R or S in it for his products.

Everything that rolls
In order to obtain the greatest possible freedom in the use of the new brand name, SKF grabbed the opportunity to cover a vast range of very different – but mutually connected – products when describing the company's operations in the brand name application. Some already existed, other would appear later and some came to nothing at all:
"Ball bearings, roller bearings, machines, transmissions, automobiles, bicyles, railway materiel, transportation devices, means of transport of all kinds and parts of and accessories for the aforementioned products".

The bicycles and the railway materiel are yet to appear, but there have been a few Volvo automobiles and other transportation devices produced over the years. Some other products that also have carried the brand name Volvo are such oddities as producer-gas burners, camping trailers and office chairs.

Full speed ahead – after five years of rest
Shortly after the start of Volvo, the automotive business came to an abrupt halt because of World War I. Potential bearing customers had to change over from cars to heavy vehicle production and other war materiel. After five years of existence, although not all of them in full operation, Aktiebolaget Volvo was discontinued in 1920. SKF had decided to market all their products under one name in the future – its own.

AB Volvo was put away in a desk drawer and rested there until August 1926 when the SKF board, after a long campaign of persuasion, eventually agreed to financially support the idea of starting up a car manufacturing operation. This had for some years been the brainchild of one very headstrong SKF employee, a certain Assar Gabrielsson.
Together with his good friend, engineer Gustaf Larson, Gabrielsson urged the building a Swedish car. SKF finally gave the go-ahead, provided the money and from the drawer of a certain desk, produced the company documents for AB Volvo. The legal name of the company was also chosen as the name for the cars to be produced. During the prototype stage they had been called GL and Larson, after Gustaf.

Ancient logotype
At the same time, the ancient chemical symbol for iron, a circle with an arrow pointing diagonally upwards to the right, was adopted.
This is one of the oldest and most common ideograms in the Western culture and originally stood for the planet Mars in the Roman Empire. Because it also symbolised the Roman god of warfare, Mars, and the masculine gender, an early relationship was established between the Mars symbol and the metal of which most weapons were made at the time, iron.
As such, the ideogram has long been the symbol of the iron industry, not least in Sweden. The iron badge on the car was supposed to take up this symbolism and create associations with the honoured traditions of the Swedish iron industry; steel and strength. The new car also got its name Volvo written in its own typeface.

The logotype was complemented with a diagonal band running across the radiator, from top left to lower right, already on the first car in April 1927. The band was originally a technical necessity to keep the chrome badge in place but it gradually developed into being a more of a decorative symbol. It is still found across the grille of everyVolvo vehicle. And in the centre of the steering wheel you still find the iron symbol.

I am still rolling
In 1999, the Volvo Car Corporation was sold by its owner AB Volvo to Ford Motor Company. One reservation was, stipulated, however: that the brand name should be used also in the future by both Volvo Cars and the rest of the companies in the Volvo Group.
The brand name was consequently put into a holding company, Volvo Trademark Holding AB, which is co-owned fifty-fifty by Volvo and Ford, and whose management decides on how the name can be used and in what contexts. Currently, the holding company's management group consists of Leif Johansson, President & CEO of AB Volvo and Bill Ford Jr,  Chairman & CEO of Ford Motor Company.

To date, some 13.5 million Volvo cars have been produced and of course millions of trucks, buses, marine, aero and industrial engines, construction equipment and so on. Of all the cars manufactured to date, some 8 million are still rolling today.
Little did patent engineer Evald Delmar realise when he signed the application documents in his capacity as SKF representative, that he was about to play an important part in creating what was to become a global industrial concern whose name is still well-known and well-respected around the world, 90 years later.

Keywords:
Historical
Descriptions and facts in this press material relate to Volvo Cars' international car range. Described features might be optional. Vehicle specifications may vary from one country to another and may be altered without prior notification.
Media Contacts
Related Images
Sep 04, 2002 ID: 5461 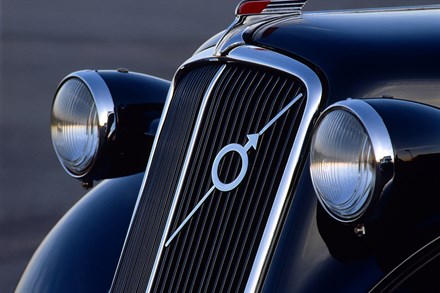 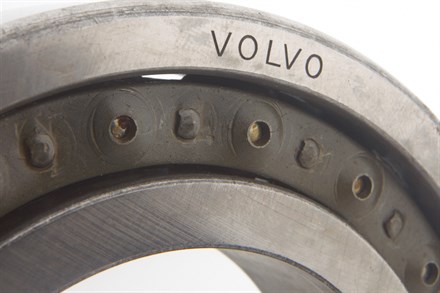