Today’s car occupant safety systems are developed using sophisticated adult and child test dummies. However, researchers still need to learn much more about risks to pregnant women and unborn babies in car crashes and how to further reduce those risks.

To shed more light on this area, Volvo Car Corporation has developed a unique computer model of a pregnant crash dummy.

“Now we're covering another life stage for our customers,” says Laura Thackray, CAE and Biomechanical Engineer at the Volvo Cars Safety Center, who developed the model and named it Linda.

Linda is a finite element method computer model of a pregnant crash test dummy. Her lower torso, abdomen and upper thigh areas are representative of the human body, with human-like tissue, whereas the rest of the model is like today’s physical Hybrid III crash test dummies, modeled of synthetic and steel materials. Her human-like parts include ribs, soft abdominal tissue, pelvic bones, gravid uterus, placenta, amniotic fluid and a 36 week-old baby, "Kira".  Linda's body size and stage of pregnancy are scalable to help represent specific occupants.
"Crash simulations testing correct safety belt placement and investigation of injury mechanisms have been among her primary uses since Linda's completion in early 2002," Thackray explains.

Potential for future development
These simulations have allowed for research of how the virtual mother-to-be and her unborn baby are affected by the safety belt and airbag in simulated car crashes. The computer model makes it possible to study – in great detail – how the belt moves, the influence of belt, airbag and steering wheel on the uterus, placenta and baby, and how the baby moves in relation to the mother’s body, amongst other things. The model can also be used to test new designs for safety belts and other safety systems.
“From the simulation results with Linda and ergonomics studies performed here at Volvo Cars, I’m certain that there’s potential for further development of today's safety systems, especially the safety belt, to provide optimized usability and protection for pregnant women.  And in doing so, I think that other occupants will benefit by the solutions,” says Thackray.
Today many pregnant women wonder whether the safety belt could harm their unborn baby if they are involved in a car crash. However, all researchers agree on recommending that they should always wear their safety belt.
“Currently, it’s the best line of protection for pregnant women and their unborn babies. But it’s crucial that the safety belt be worn in the right way. It should fit close to the body, with the diagonal belt between the breasts and to the side of the belly. The lap belt should lay flat and as low as possible under the belly and must never be worn above the hips," says Laura Thackray.
She also states that "Another recommendation to note is that pregnant drivers should position their seats rearward and if possible, the steering wheels forward such that they can still comfortably drive, but have a maximal distance between their belly and the steering wheel.

The virtual dummy, Linda, in cross-section.  The model is currently based on a woman in the final stage of pregnancy, and represents the body size of an average-sized American or European woman.

“Volvo Cars is striving to learn more about how to better protect pregnant women and their unborn children,” says model developer Laura Thackray, CAE and Biomechanical Engineer at the Volvo Cars Safety Center.

Keywords:
Safety
Descriptions and facts in this press material relate to Volvo Cars' international car range. Described features might be optional. Vehicle specifications may vary from one country to another and may be altered without prior notification.
To view the full copyright information click here
Media Contacts
Related Images
Jun 11, 2004 ID: 8526 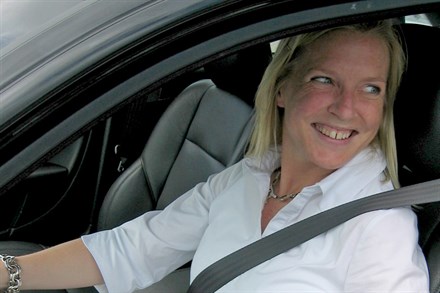 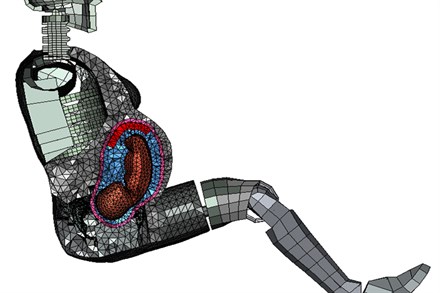