For over thirty years, Volvo Car Corporation has analysed car accidents in order to learn more about traffic safety. The analyses have given broad knowledge about some steps that can be taken to reduce accidents involving cars. Volvo wants to spread this knowledge, not only with the help of short-term campaigns, such as handing out reflectors, but also in longer-term projects.

One of these is TARC, the Traffic Accident Research Centre, which was founded a little over a year ago in Thailand, a country where nearly 30,000 people die every year in traffic accidents.

TARC is an assistance project managed by Volvo Cars, initiated by the organisation Global Road Safety Partnership, GRSP. The foundation’s aim is to contribute, with the help of Volvo’s research, to increasing knowledge of road safety in Thailand.

“Volvo Cars has had its own accident research team for thirty years and has studied over 30,000 accidents. For some of the accidents that occur in Sweden, where a newer Volvo is involved, the research team travels to the accident site and investigates the accident, analyses the facts, and puts all information into a database. Now we want to transfer our knowledge and adapt our working methods to conditions in Thai society. In Thailand, the aim is to cover accidents involving all kinds of vehicles – cars, buses, trucks, and motorcycles,” says John-Fredrik Grönvall, TARC project director. The centre was opened by the King of Sweden in February 2003, and it cooperates with officials and the Thai Ministry of Transport. Volvo Cars contributes by providing emergency vehicles and training the employees. At TARC, there are five employees who go out when a traffic accident happens in Bangkok.
“They collect data about the driver, about the vehicle, and about the traffic environment. In addition, they collect factual information in three time dimensions: how the accident site looked before, during, and after the accident,” says John-Fredrik Grönvall.

This in-depth part of the study is supplemented by accident statistics. Everything is collected into a database, which we hope will give Thai officials the basis for making the best decisions about the traffic situation in Thailand. Volvo Cars, in turn, is gaining greater knowledge about traffic in developing countries, which it will utilise in developing future cars.
“Our aim is not to find solutions, but to contribute a scientific basis. Decision-makers will then be able to get away from guesses and speculations,” says John-Fredrik Grönvall.

Thailand is also one of the countries where Volvo Cars will be handing out reflectors on 7 April, World Health Day.
“The risk of dying in traffic in Thailand is nearly ten times higher than in the West. The number of cars and people on the roads has increased greatly, and the infrastructure has not kept up with development everywhere. Heavy traffic combined with pedestrians and cars that create many dangerous situations,” says John-Fredrik Grönvall.
Street lighting is still rare on roads in the countryside. Here, reflectors should be a big help.
“With reflectors, a pedestrian can be seen several hundred metres away,” says John-Fredrik Grönvall. “This is an extremely cheap solution, but reflectors are practically non-existent in Thailand and other developing countries. In the longer term, if we can increase knowledge about the positive effects of reflectors, then we will really be able to improve the traffic situation.”

Keywords:
Safety
Descriptions and facts in this press material relate to Volvo Cars' international car range. Described features might be optional. Vehicle specifications may vary from one country to another and may be altered without prior notification.
Media Contacts
Related Images
Feb 19, 2003 ID: 7802 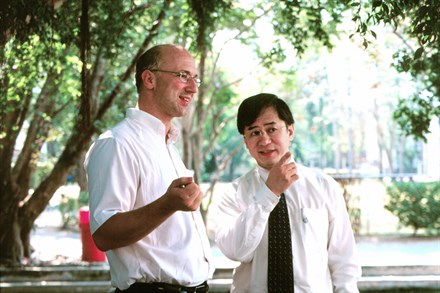 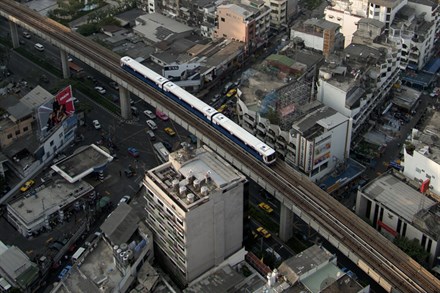