CAMPER with Emirates Team New Zealand, throttled back overnight in winds gusting  35 knots and mountainous seas, but once daylight broke, they were up to speed and screamed across the finish to take 25 points to add to their four points earned for a third-place finish in the Iberdrola In-Port Race in Alicante on October 29.

They are now in second place overall on the Volvo Ocean Race leaderboard with 29 points - two behind Team Telefónica (Iker Martínez/ESP) who finished first on Saturday evening. Groupama sailing team are expected to finish on Tuesday, with third place set to take them up to third overall with 22 points. Abu Dhabi Ocean Racing (6 points), PUMA Ocean Racing powered by BERG (5) and Team Sanya (3) were all forced to retire from Leg 1.

On stepping ashore, skipper Chris Nicholson/AUS spoke of the decision to stay on the African coast early in the leg:

"Everyone was trying to get to the coast and we were getting there nicely, but it was the wrong call.  It's been 20 days playing catch-up from that decision. We weren't able to make up that deficit.  We would have loved to have been head to head with Telefónica and PUMA.

He added that it was a tough leg: "The conditions were pretty rough as you can see with all damage from the boats. We handled it well, we're here in second and so that's a good result."

Co-skipper Stu Bannatyne (NZL) said: "It's very nice to be in Cape Town finally. It felt like a very long leg. We got a podium result so we are very happy. Last night we backed off once Telefónica had finished, with winds between 35 and 40 knots. We nursed it in last night as there was no point pushing at that point."

The highlight for CAMPER was their run of 554.16 nautical miles in the 24-hour period up to 1755 UTC on November 24. That will almost certainly make them the winner of the IWC Speed Record Challenge for Leg 1. The overall fastest time, over all nine legs of the race, will land the 11 members of the winning crew with an IWC Portuguese Yacht Club Chronograph Edition ‘Volvo Ocean Race 2011-12'.

CAMPER's fortunes on this opening leg were mixed. After leading the six-boat fleet in a slick start and out through the Straits of Gibraltar, they paid a high price for a tactical dilemma early on day three as the fleet headed out into the Atlantic.

It was an expensive decision, and one from which the team never really recovered and, by 2200 UTC on day five, CAMPER were 105 nautical miles behind in last place. No one likes not being in the lead and on board, the crew of CAMPER had been left with a bitter taste after sacrificing so many miles.

The losses continued to grow as the team struggled to get out to the west. The lowest point was early on day seven, when they logged 334 nm behind the leader, but from 2200 UTC that night, their fortunes changed. That night the team clawed back 56 miles.  The boat was finally back on track and taking the course the crew had wanted. The gains continued and CAMPER were back in contention as the expensive westerly option started to pay dividends.

On day nine, CAMPER had moved up to third place and rounded the island of Fernando de Noronha on day 13, November 17, 126 nm behind PUMA's Mar Mostro. On the fateful day that PUMA's Mostro dismasted, day 17, November 21, CAMPER had closed the gap to within 110 nm.

The crew had their feet firmly on the pedal and were pushing the boat to her limits and by day 18, the pressure had taken its toll. Bowman Mike Pammenter from South Africa was washed down the deck, his fall broken by his face smashing against the shrouds. It was a stern reminder of just how dangerous and on the edge this race can be.  His face stitched up and minus a front tooth, Pammenter was soon back on deck and CAMPER continued at breakneck speed towards Cape Town. She was now hot on the heels of leg leader Telefónica and in touch, just 94 nm behind.

"Now we need to think about our new rival CAMPER," wrote the crew of Telefónica. But luck ran out for CAMPER who arrived at the exciting cold front, the super-quick conveyor belt to Cape Town, a little too late to gain the full benefit and Telefónica were gone.  CAMPER eventually finished Leg 1 over 200 nm and 16 hours behind.

Groupama 4 will be the next boat to finish on Tuesday morning.  She is currently 534 nm behind and was averaging 21 knots at the time of CAMPER's finish.

For more information on the Volvo Ocean Race please visit:www.volvooceanrace.com

Keywords:
Special Interests, Sponsorship
Descriptions and facts in this press material relate to Volvo Cars' international car range. Described features might be optional. Vehicle specifications may vary from one country to another and may be altered without prior notification.
Media Contacts
Related Images
Nov 05, 2011 ID: 41255 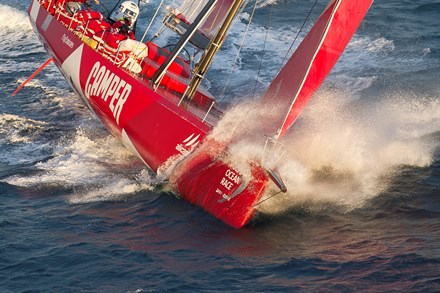