Volvo Polestar Racing and driver Robert Dahlgren bagged points in Shanghai, China, at the WTCC (World Touring Car Championship) despite treacherous weather conditions in qualifying that played a big part in the overall results of the weekend.
"We were fast all weekend, but qualifying was a lottery that unfortunately had a decisive impact on the rest of the weekend for us," said Dahlgren.

Dahlgren was in the very top of the practice sessions, but a drying track in qualifying meant that the fastest times were set in the final seconds of the session.
"We came close, but we went out a bit too early which meant that our tyres were too worn at the very end of the session. It was unfortunate, but that is racing sometimes," said Dahlgren.

The Volvo driver had a tough job for the races with 13th on the grid. However Dahlgren showed promising pace and climbed four places to finish ninth in both races, scoring valuable points on a track that is notoriously difficult to pass on.

"The track is really difficult to pass on with short braking areas, but I had two good races. I held a stronger pace than most of the drivers in front of me and I was able to make some ground to finish in the points," said Dahlgren.

Next up for Dahlgren and Volvo Polestar Racing is the WTCC season final at legendary street circuit Macau in two weeks.

"Macau is going to be the toughest challenge of the year, it is a track that all drivers have to race on once in their lifetime. I am very much looking forward to the race and our firm goal is to end the season on a high," said Dahlgren.

Keywords:
Motorsport
Descriptions and facts in this press material relate to Volvo Cars' international car range. Described features might be optional. Vehicle specifications may vary from one country to another and may be altered without prior notification.
Media Contacts
Related Images
Nov 07, 2011 ID: 41003 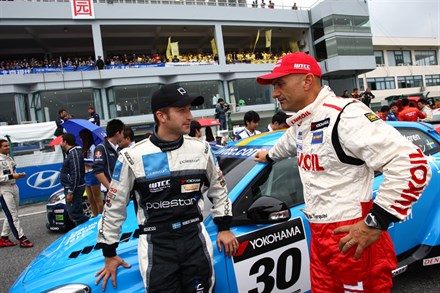