Five Of The World's Top 11 Golfplayers Already Qualified As Championship Looks Set For Another Unrivalled World Class Field.Two Major Champions, a Ryder Cup winner and a former Volvo Masters champion are the first four players to qualify and confirm their entry into the 24-man 2011 Volvo World Match Play Championship via the refined qualification criteria  devised by Volvo and set to ensure one of the highest quality international fields on the European Tour in 2010.

Major Champions Graeme McDowell and Y E Yang; Ross Fisher, the current Defending Champion who made a successful Ryder Cup debut as part of Europe's winning Ryder Cup Team; and 2008 Volvo Masters champion Søren Kjeldsen will all head to the Finca Cortesín in Southern Spain for the Volvo World Match Play Championship which takes place from May 19-22, 2011.

Next year's Championship, which will once again feature the successful round robin group format in the early stages, will see the field increased from 16 to 24 players with a modified qualification criteria guaranteed to gather together one of the highest quality fields in the world. The field will compete for an increased prize fund of €3.4 million and a first prize of €800,000, one of the highest on The European Tour.

Increasing the field from 16 to 24 world class players with a specially revised criteria devised will ensure only the most in-form successful international players will win a coveted place at the 2011 Volvo World Match Play Championship. On arrival at Finca Cortesín the players will be divided into eight groups of three players to be played on Thursday and Friday with 16 players progressing to Saturday in a knock-out format with the semis and final played on Sunday.

Ross Fisher, the first player to secure his place in the 2011 field as the defending Champion, said "The list of past winners of the World Match Play Championship reads like a ‘Who's Who' of world golf and having grown up watching the Championship when it was played at its original Wentworth home, it was a dream come true to actually win it. I love the thrill of match play and I am really looking forward to returning to the beautiful Finca Cortesín to defend my title."

YE Yang, who became the second man to seal his spot in the field by winning the Volvo China Open added, "I have never played in the Volvo World Match Play Championship so I am delighted to include it in my schedule for next year. It is a very prestigious tournament with a lot of history and I hear Finca Cortesín is really luxurious and a fantastic match play course. I am excited to make my debut there in May."

Graeme McDowell and Søren Kjeldsen are the latest to confirm having finished first and second respectively in the Andalucía Valderrama Masters last month.

The Northern Irishman, who won the 2010 US Open Championship at Pebble Beach and holed the winning putt for Europe in The Ryder Cup, has now reached a career high ranking of 11 on the Official World Golf Ranking.

McDowell, whose first European Tour victory was at the 2002 Volvo Scandinavian Masters, enthused, "I am delighted to have qualified for my first Volvo World Match Play Championship. Fresh from the Ryder Cup I am, of course, already anticipating another match play event with great excitement. As everyone knows, I love match play so this will certainly  be one of the highlights on my schedule in 2011. I like the idea of the ‘champions league' style group format seeing how different player's styles match up against each other and think it is great for the spectators and the players to have this variety on the schedule in the shape of a match play tournament. I am looking forward to my debut in this historic event and also to enjoying the wonderful hospitality on offer at Finca Cortesín which I recently experienced first hand when I stayed there during the Andalucía Valderrama Masters."

Denmark's Søren Kjeldsen, who qualified following his second place finish at the Andalucía Valderrama Masters, continuing the extraordinary run of success he has enjoyed in Spain including wins at the 2008 Volvo Masters and the 2009 Open de Andalucía de Golf. He said, "I don't know what it is but I always seem to play well in Spain, maybe it is the wonderful climate or the great golf facilities but I arrive in Spain and my golf game just seems to go up a notch. This is the first Volvo World Match Play Championship I have qualified for so I am really excited. I won the Volvo Masters just down the road at Valderrama so it would be fantastic to be able to do the Volvo double at Finca Cortesín."

Per Ericsson, President of Volvo Event Management Golf, explained, "This is a great quartet of players and together with the latest qualifiers they represent a fantastic start in our efforts to assemble a world class field that is even better than the all-star 16-man line up we attracted to the 2009 edition of the Volvo World Match Play Championship."

"We continually strive to improve and enhance the Volvo World Match Play Championship and having taken the bold step to move the event from the UK to Spain last time, we are further improving it by increasing the number of players, and therefore the depth of world class golf on offer, whilst moving to a new, permanent spring date is another big decision that will pay dividends for us."

"I am sure that everyone who comes to the magnificent Finca Cortesín Golf Club and Hotel next May, players and their families, spectators and members of the media will love the special ambience of a venue fit in every way for champion golfers."

Guy Kinnings, Managing Director of IMG Golf, EMEA added "We were very pleased with the success of the 2009 Volvo World Match Play Championship and are very happy to have such a forward thinking partner as Volvo whereby we continue to work hard together to improve this already great event."

Vicente Rubio, Managing Director, Finca Cortesín added, "Since hosting the Championship in 2009, our very first European Tour event, we have all been eagerly anticipating the return of so many of the world's class players to our Resort. We  had such wonderful feedback with regards to our golf course and hotel facilities after the first Championship and we are working hard to ensure that everything is, once again, in perfect order for us to host our second World Match Play Championship in May.

To get a complete picture of the fantastic venue and all required info from Volvo and Finca Cortesín, each player who qualifies for the Volvo World Match Play Championship will receive an iPad where all of this can be found.

For further information on the Volvo World Match Play Championship, including the Card of the Course, the Prize Money breakdown, the Qualification Criteria in full, and a selection of video interviews, please visit www.volvoworldmatchplay.com

The field will comprise 24 qualifiers, determined by the following criteria:

iii) The leading two players** (not otherwise exempt above) from the

iv) The leading player** (not otherwise exempt above) from the

vi) The leading player** (not otherwise exempt above) from the

vii) The leading player** (not otherwise exempt above) from the

viii) The leading two players** (not otherwise exempt above) from the

ix) The leading player (not otherwise exempt above), based upon his

nationality, listed on the Official World Golf Ranking, from each of the

following regions following the completion of the 2011 US Masters:

Golf Ranking following the completion of the 2011 US Masters

xi) The leading two players (not otherwise exempt above) from the

xii) The leading player** (not otherwise exempt above) from the

Ranking following the completion of the 2011 US Masters.

Keywords:
Special Interests, Sponsorship
Descriptions and facts in this press material relate to Volvo Cars' international car range. Described features might be optional. Vehicle specifications may vary from one country to another and may be altered without prior notification.
To view the full copyright information click here
Media Contacts
Related Images
Dec 03, 2010 ID: 35805 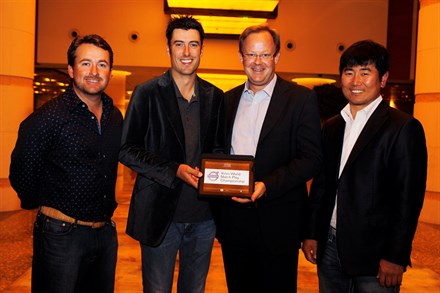