The sun shone throughout the second day of the 2010 Volvo China Open and it was the Korean contingent which made most use of the weather as no fewer than four men from Korea in the top 10 going into the weekend climax of China's national open golf championship.

21-year-old Kim Do-hoon, who shared the lead on eight-under after the opening round with Thailand's Thongchai Jaidee moved a stroke clear of the Thai star, carding a three-under-par 69 to Thongchai's 70.

‘I am very pleased with my round and maybe a little surprised to be in the lead," said the 21-year-old, adding, "I feel very proud to be leading the Korean contingent in the field."

Thongchai was six-shots worse off his opening round course record despite a great improvement in the conditions and was at pains to explain what was still a very good round of golf over what is being regarded by the players as a genuine open championship track.

"It wasn't quite going for me in the same way as it was yesterday," said Thongchai, explaining, "This is a dangerous golf course and you have to treat it with respect.

Welsh wizard Jamie Donaldson added a 68 to his opening 66 to join Thongchai on 10-under-par, as does another Korean, YE Yang, the first Asian to win a ‘Major'. The reigning USPGA Championship winner had just 21 putts in a fine round of 66, getting the 38-year-old right into contention for the business end of the tournament this weekend.

Another man on an upward trajectory was Spanish star Pablo Larrazábal, who added a 69 to his opening 66 to sit two off the lead at the halfway stage on nine-under, as is Finn Mikko Ilonen who signed for a five-under-par 67.

Chinese number one Liang Wenchong is handily-placed on eight-under after a steady, if unspectacular second round of 70, with US Ryder Cup captain Corey Pavin stretching his advantage over opposite number Colin Montgomerie, Pavin carding a 70 although the Scot made amends for Thursday's disappointing round with a four-under-par 68.

Asked if he might feel pressure from the weight of local expectation, Liang said "I am very happy to be where I am placed at the end of the second round," whilst Pavin described his second round as, "pretty good."

Another pair of Koreans, Kim Dae-hyun and the ever-dangerous Noh Seung-yul look dangerous on seven-under, four off the lead. But the pairing to follow on the second round was clearly where the action was, the all-English duo of Mark Foster and Oliver Fisher; the pair were a combined 15-under-par for the day, Foster's 64 one better than his playing partner Fisher.

Of the 72 players who made the halfway cut, Ryder Cup captain Colin Montgomerie and team mate Graeme McDowell could both be dangerous on four under par.

"You never know," said an upbeat Monty as he planted a tree for the environment after his round of four-under-par alongside 2004 Volvo China Open champion Stephen Dodd of Wales.

Some fascinating pairings should light-up Super Saturday, including the all-Korean pairing on Noh Seung-yul and Kim Dae-hyun, off at 12.13hrs followed by Corey Pavin and Chinese number one Liang Wenchong, who is certain to be the centre of local attention.

Please watch the interview at www.volvochinaopen.com

Keywords:
Special Interests, Sponsorship
Descriptions and facts in this press material relate to Volvo Cars' international car range. Described features might be optional. Vehicle specifications may vary from one country to another and may be altered without prior notification.
Media Contacts
Related Images
Apr 16, 2010 ID: 32330 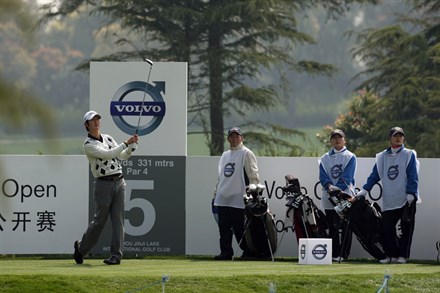 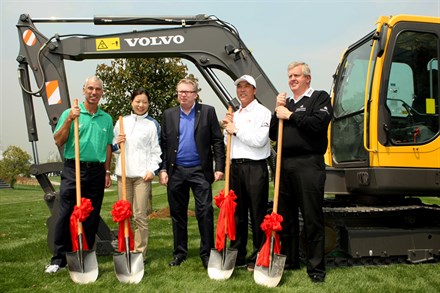