Volvo Cars’ new and improved hybrid powertrain brings the all-electric range up to a projected 90 kilometres* on a single charge. With the average premium car owner travelling less than 50 kilometres each weekday**, most Volvo drivers with home charging will be able do their daily motoring on pure electric power in a new Volvo plug-in hybrid.

The main improvements include a new long-range battery, featuring a third layer of cells to increase nominal energy from 11.6kWh to 18.8kWh, and a more powerful rear electric motor now delivering 145hp. The additional electric power results in a total combined output of 350hp for Recharge T6 and 455hp for Recharge T8 models, making the latter the most powerful Volvo cars ever produced. Besides the new powertrain, new upgrades include one-pedal drive on specific models.

The increased battery capability means that more customers will be able to drive primarily in pure electric mode, and Volvo Cars estimates that the new powertrain has the potential to reduce CO2 emissions by up to around 50 per cent under the WLTP drive cycle.

“It’s 2021, and people should no longer have to rely on petrol or diesel when commuting,” said Henrik Green, chief technology officer at Volvo Cars. “Our latest plug-in hybrids deliver all the electric driving range needed in most people’s everyday life.”

The new and improved e-motor ups the power in the rear wheels by 65 per cent, enhancing performance and driveability in all scenarios. Together with the boosted battery, the upgraded e-motor also enables better all-wheel drive capability which can prove particularly useful at low speeds, when towing, or when driving on slippery roads that demand extra traction and stability.

The suite of upgrades includes the addition of one-pedal drive, which can help deliver an especially smooth and intuitive driving experience. The function, already seen on pure electric Volvo models, gives the driver the option of controlling both acceleration and deceleration with only the accelerator pedal. It will be rolled out initially on the Volvo XC60, S90 and V90 Recharge plug-in hybrids.

The extra battery capacity also comes in useful on cold winter days, as well as in scorching heat. Even when the car is not plugged in, drivers are able to pre-heat or pre-cool the cabin remotely via the Volvo Cars app while still maintaining a generous amount of electric range.

Volvo Cars is committed to becoming a leader in the fast-growing premium electric car market. By the middle of this decade it aims to sell 1.2 million cars globally, with at least half being fully electric cars. By 2030, it plans to become a fully electric car company.

Customer research shows that Volvo Cars’ plug-in hybrids are already now driven around half of the time in pure electric mode. This powertrain upgrade will increase that percentage, further cementing their position as ‘part-time electric cars’.

“Driving a plug-in hybrid is often a stepping-stone to going fully electric,” said Henrik Green. “We believe that this upgrade will show to many that driving electric is the future, and take us closer to our 2030 ambition of becoming fully electric.”

The new powertrain is introduced on all Volvo Recharge plug-in hybrid models based on the Scalable Product Architecture (SPA), which include the Volvo S60, V60, XC60, S90, V90 and XC90 Recharge models.

Along with the powertrain improvements, the turbocharged T8 petrol engine is upgraded for higher fuel efficiency and performance. This means higher engine power at low revs and take-off while ensuring a more refined electrified drive with reduced CO2 tailpipe emissions.

*Range figures vary per model. Range according to the realistic WLTP driving cycle under controlled conditions for a new car. Real-world range may vary.

**Based on research from consulting company Sigma. Sigma’s research includes statistics on average daily driving distances in China, the US, France, Germany, Italy, Spain and the UK.

Keywords:
XC60, Product News, 2022
Descriptions and facts in this press material relate to Volvo Cars' international car range. Described features might be optional. Vehicle specifications may vary from one country to another and may be altered without prior notification.
To view the full copyright information click here
Media Contacts
Related Images
Sep 22, 2021 ID: 287429 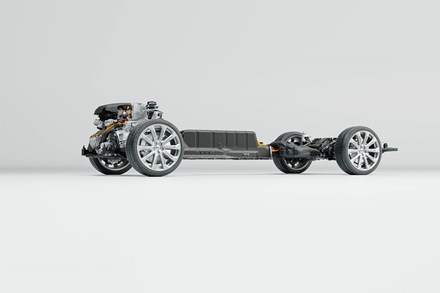 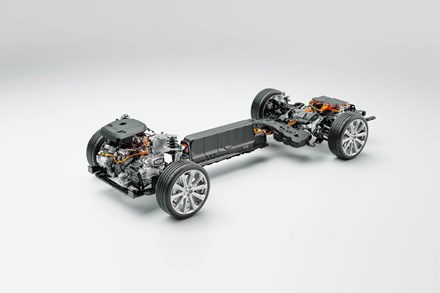