Volvo Cars has cemented its position as one of the most attractive employers in Sweden, based on a leading survey which ranks the most popular companies among engineering professionals and students.

These results were published today in the Karriärbarometern by Universum survey, an annual research study in which 26,000 professionals and 22,000 university and college students speak out about the most attractive employers in Sweden.

“We are a company with purpose, we want to make a difference. Our commitment to save lives and increase the number of electrified cars together with our new products have increased our attractiveness as an employer,” said Hanna Fager, Senior Vice President Human Resources at Volvo Cars. “To be valued so highly by both current and future engineers in Sweden is fantastic, not in the least because we will continue to depend on attracting the best talents to secure our continued growth.”

Compared to the results of the 2016 survey, Volvo Cars has clearly become more popular as an employer among both bachelor and masters engineers. It is also growing in popularity among business and economics professionals and students.

Earlier this year, a related survey named Företagsbarometern by Universum showed that among engineering students, Volvo Cars is the number one employer of choice for bachelor engineers-to-be. Masters engineering students ranked the company as their second favorite future employer.

The Universum survey result is an important development, as the car industry is changing rapidly and Volvo Cars requires a constant supply of fresh engineering know-how in areas such as software, electrification and connectivity.

On top of that the company is globalising at an increasing pace, both in terms of its manufacturing operations as well as in corporate functions such as sales, marketing, finance and legal.

Volvo Cars has in the last five years expanded its workforce by over 10,000 people globally, including over 2,000 engineers in Gothenburg, Sweden.

Keywords:
Product News
Descriptions and facts in this press material relate to Volvo Cars' international car range. Described features might be optional. Vehicle specifications may vary from one country to another and may be altered without prior notification.
To view the full copyright information click here
Media Contacts
Related Images
Oct 05, 2017 ID: 214853 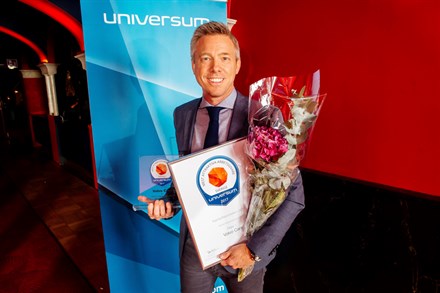