Volvo Car Group, the premium car maker, has reported third quarter operating profit of SEK2,067m compared to SEK1,276m in the same period last year and a year-on-year increase in revenue to SEK41,1bn from SEK36.1bn previously. The operating margin rose from 3.5 per cent in the third quarter of 2015 to 5 per cent in 2016.

“With nine months of the year completed, I can state with confidence that Volvo Cars is on track for another record year in terms of sales and that operating profit for the year is expected to improve substantially,” said Håkan Samuelsson, president and chief executive.

Volvo Cars attributed the strong third quarter performance to robust sales in major markets of both lifecycle models and new models. The bestselling cars in the quarter were two lifecycle cars, the XC60 SUV and V40 hatchback, with sales of 38,000 and 23,000 respectively, closely followed by the new XC90 SUV with sales of 22,000. Sales of the XC90 hit 66,000 for the first nine months of the year.

Overall, third quarter retail sales increased 7.8 per cent to 122,766 compared to the same period last year, with sales in China and the US both up over 20 per cent in the period. Full details of the company’s operational and financial performance can be found here.

At the same time as Volvo Cars is growing in terms of sales and profitability, it is also continuing to unveil an all new range of cars.

In the third quarter of 2016, it was possible for the first time for customers to purchase any of Volvo Cars’ top-of-the-range 90 series cars. There are good signs that the success of the XC90 SUV is being followed by strong demand for the S90 sedan and V90 estate.

Another significant development in the third quarter was Volvo Cars’ move to entrench its position as a leader in autonomous driving by forging two important alliances.

The first was with Uber, the US online ride hailing company. Volvo Cars is the first car maker to work with Uber to develop base cars to provide driverless ride hailing services. “It is highly significant that of all the car companies in the world, Uber joined forces with Volvo Cars,” said Mr Samuelsson.

The second is the establishment of a new joint venture company with Autoliv, the Swedish automotive safety technology company, to develop and sell software for autonomous driving cars.

“Volvo Cars will no longer be purely a car maker but increasingly a software developer responding to important technological changes in the automotive industry,” said Mr Samuelsson.

Keywords:
Corporate News
Descriptions and facts in this press material relate to Volvo Cars' international car range. Described features might be optional. Vehicle specifications may vary from one country to another and may be altered without prior notification.
To view the full copyright information click here
Media Contacts
Related Images
May 31, 2016 ID: 191758 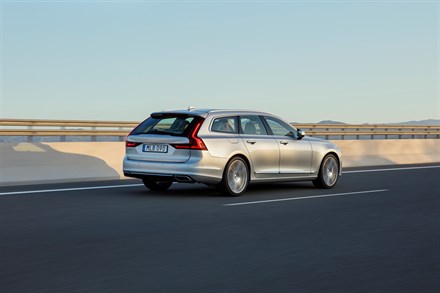