At the Detroit Motor Show on January 7, 2002, Volvo Cars launched an eagerly awaited new model. A model customers and dealers especially in America had been yearning for: a Volvo SUV. The model was so anticipated that it racked up 15,000 orders before sales had even started.

Throughout its lifetime, the XC90 would be awarded more than 100 international distinctions, including "SUV of the Year" in 2003 and being named Sweden's most valuable export product, with an annual export value of more than SEK 40 billion in the peak years.

Many critics initially felt that Volvo was too late entering the SUV segment in 2002. However, the XC90 came to represent a new standard for the segment by resolving many of the problems experienced in earlier SUVs. With the XC90, Volvo would show innovative solutions to the drawbacks for which the SUVs of the time were known.

These solutions included the ability to fold the rear seats flat, driving properties equivalent to those of a regular car and leading fuel economy within the segment. The Volvo XC90 also brought global innovations:

The Volvo XC90 was launched with a range of five and six-cylinder engines. All were transversely mounted in accordance with Volvo's powertrain concept. In 2004, the range was extended with a powerful V8 engine combined with a six speed automatic gearbox.

The last XC90 rolled out of the Torslanda factory in Gothenburg as number 636,143on July 11, 2014 to make room for the next generation of the XC90. The last of Volvo’s first ever SUV was driven directly to the Volvo Museum.

Keywords:
XC90 (2002-2014), Historical, 2014
Descriptions and facts in this press material relate to Volvo Cars' international car range. Described features might be optional. Vehicle specifications may vary from one country to another and may be altered without prior notification.
To view the full copyright information click here
Media Contacts
Related Images
Jul 12, 2012 ID: 44892 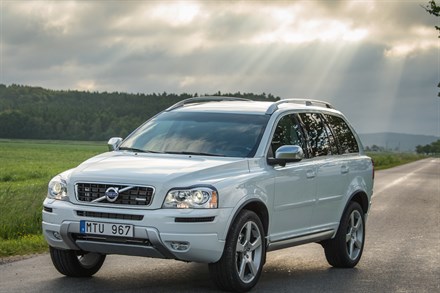