The two Ericsson teams shared the same top two positions on the previous leg from Qingdao in China to Rio, but in that case, Ericsson 3 came out on top.

Skipper Torben Grael said:  "It feels fantastic. I think we had a very good leg. We were always very close to the other boats.

"I think it was very important when we gybed a few days ago. After that, there were not many options. We just managed to keep the front, which was not easy.

"Even here at the end, when it looked like it was OK, the wind was very light with sea breeze fighting the land breeze. It was a very hard job, but a very good result for us. It couldn't be better. It's one more step towards our objective. Normally, regattas in the United States give me luck. This is another one of them."

British navigator Jules Salter added, "It was very hard work, probably the hardest, but we had a lot of luck to get this win.  People talk about strategy and reading books, but I think it comes down to luck.  We knew our sails and our crew work was good, but it was never certain until we were over the finish.  I've had 30 minutes sleep in the past day.  Really, the whole leg has been a bit like that."

A fearsome battle played out in the closing stages of the leg to decide the points for second place, which culminated in Ericsson 3 taking second, finishing at 2117 GMT, just over five minutes ahead of Telefónica Blue (2123 GMT), after 4,900 nm and nearly 16 days of ocean racing.  It was a particularly remarkable achievement for Ericsson 3, whose skipper Magnus Olsson was washed into the steering pedestal on day six, 16 April, and was nursing a bruised back.

"Of course we are really happy," said the skipper when he stepped ashore. "My back is not too bad, the pain at the beginning was a lot, but my crew did all the work.  Telefónica Blue was coming in from behind and we kept watch on them.  We have all had our problems and Ericsson 4 didn't have a watermaker, but we wouldn't have beaten them, but maybe next time," he added.

A relieved Bouwe Bekking said on finishing third: "We had a really good come back after two horrible days.  Passing PUMA and nearly catching Ericsson 3 was great.  It has been fantastic and it is really nice to be back here.  We have had some shocking times, but we have come back to a real high".

Scoring 3.5 points for second place at the scoring gate of Fernando de Noronha and eight points for a leg win, Ericsson 4 extends her overall lead to 77.5 points.  Telefónica Blue moves up to second overall with 64.5 points, only half a point ahead of PUMA provided she finishes in her current position of fourth.  Ericsson 3 has a total of 53 points, which is good enough for fourth place on the overall leaderboard.

Having been the bridesmaid so often, leg six was one that PUMA's skipper, Kenny Read would particularly have liked to win, but, once again, it wasn't to be, and the team finished in Boston today at 2312 GMT (1812 local) in fourth place.

PUMA began leg six in the lead, after finishing second in the Rio in-port race, but quickly dropped to seventh the following day.  The first third of PUMA's leg was spent in the second division until, on day seven, they pulled up to third place.

The fight for fifth place in leg six of the Volvo Ocean Race went down to the wire today between two Spaniards, Fernando Echávarri on Telefónica Black versus Roberto Bérmudez at the helm of the generation one boat, Delta Lloyd.

After a tremendous battle, Telefónica Black crossed the finish ahead of Delta Lloyd and claimed the four points on offer for fifth place, finishing at 0948 GMT (0448 local).  Delta Lloyd crossed at 1010 GMT (0510 local).  She adds three points to her overall tally.

The final boat to finish will be Green Dragon, which had approximately 38 nm to run when the first five had arrived.

Race reports are issued daily to the media at 1300 GMT by email while the fleet is at sea; however, positions are updated every three hours on www.volvooceanrace.org  where you will also find the latest news, feature stories, images and video.  Full press information can be read and downloaded from: http://press.volvooceanrace.org/

Broadcast
For broadcast-standard video, please go to: http://www.thenewsmarket.com/
If you are a first-time user, please take a moment to register.
For assistance, please Email: journalisthelp@thenewsmarket.com

Keywords:
Special Interests, Sponsorship
Descriptions and facts in this press material relate to Volvo Cars' international car range. Described features might be optional. Vehicle specifications may vary from one country to another and may be altered without prior notification.
Media Contacts
Related Images
Apr 27, 2009 ID: 19390 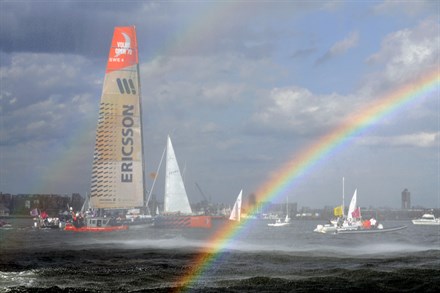