Ericsson 4 Does it Again: Two Wins out of Two

Torben Grael from Brasil and his international crew onboard Ericsson 4 made it two wins in a row when they crossed the finish of leg two of the Volvo Ocean Race in Cochin, India at 2252 GMT (0422 local time).

The 4,450 nm leg, which started from Cape Town, South Africa on 15 November took Grael and his men 14 days, 11 hours, 32 minutes and 30 seconds (elapsed time 14:11:32:30).  Adding the four points the team collected for passing through the leg two scoring gate (the line of longitude 58 degrees east which the fleet had to pass from east to west anywhere south of the latitude 20 degrees south), to the eight points for a leg win, boosts the team's overall score to 26 points.

On stepping ashore in Cochin, skipper Torben Grael said, "I am very happy to be here.  The trip had a lot of very difficult conditions, cold and wet and the light Doldrums.  We had many breakdowns, but we got to the gate in a good position and of course, we are very happy to be here in first place after a hard few days and to get a good result."

British navigator, Jules Salter, said, "It's a relief that we are here.  Light airs prove to be more trouble than heavy, and it was hard trying to work out what was going on, but it came good in the end.  This afternoon was very difficult to work out where the land breeze was coming from but, luckily, it came and it's great to be here."

It was a dramatic first week to this leg, when the fleet headed south from Cape Town into the Southern Ocean to pick up the strong westerly winds, which would propel the boats quickly towards the scoring gate.  Many of the eight-strong fleet suffered damage in the big and confused seas caused by the Algulhas current, a notoriously rough stretch of water.

Ericsson 4 had their fair share of broaches, blown out sails, downtime and bad luck, and for most of week one, Grael was happy to keep Ericsson 4 rumbling along in the middle of the pack, often behind sister ship, Ericsson 3 (Anders Lewander/SWE).

It was on day eight, 22 November, once the fleet had passed through the gate and started to point north, that Ericsson 4 moved into the top position. There were still 2239 miles to the finish, and Ericsson 3 was just three miles behind.

On day nine, the 1300 GMT position report showed Ericsson 4 seven miles behind Ericsson 3 again.  Twenty-four hours later Grael again had a tenuous lead, but the breeze ahead had slowed and the fleet was starting to compress.

Ericsson's big move came on day 12. The group of four boats, Ericsson 4, Ericsson 3, PUMA (Ken Read/USA) and Green Dragon (Ian Walker/GBR), who had all chosen the middle lane through the Doldrums, were still tightly packed when Ericsson 4 disappeared into a well-positioned rain shower. She emerged 48 nm ahead of Ericsson 3 and sailing at twice the speed of anyone else. The rest of the group could only watch, as they sat, practically becalmed.

The only challenger to Ericsson 4's lead from that moment was a late attack by Telefónica Blue (Bouwe Bekking/NED), who was forced, by damage to their daggerboard, to choose the westerly route to pass through the Doldrums.  On day 14, Telefónica Blue had closed the gap, but was still a comfortable 111 nautical miles behind Ericsson 4. Still closing today, the Spanish team finally ran out of runway, and Ericsson 4 claimed a second and momentous victory. Telefónica Blue is expected to arrive in Cochin Monday morning.

Racing reports are issued daily by email to the media at 1300 GMT, or as soon as the next boat finishes, whichever is the sooner.  Positions are available every three hours on www.volvooceanrace.org. Click on RESULTS at the top of the page to go straight to the points table and onboard data.

Images
High resolution images can be downloaded from: http://images.volvooceanrace.org

Broadcast
For broadcast-standard video, please go to: www.thenewsmarket.com´
If you are a first-time user, please take a moment to register.
For assistance, please email journalisthelp@thenewsmarket.com

Keywords:
Special Interests, Sponsorship
Descriptions and facts in this press material relate to Volvo Cars' international car range. Described features might be optional. Vehicle specifications may vary from one country to another and may be altered without prior notification.
Media Contacts
Related Images
Dec 01, 2008 ID: 18193 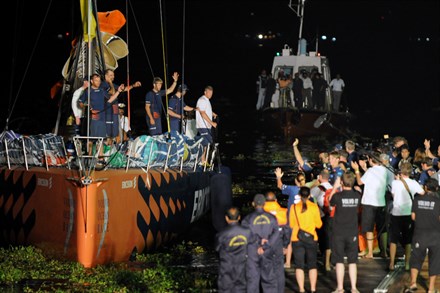